Kpokpogri arrested after clash with Tonto Dikeh over SUV ownership

Dikeh and Kpokpogri have been in a heated war of words on social media after their relationship turned sour.

They had accused each other of cheating, with a series of leaked audios surfacing online to back their claims.

Kpokpogri was arrested at Transcorp Hilton Hotel, Maitama in Abuja after he confronted Tonto to retrieve a Lexus SUV.

Kpokpogri was said to have traced the Lexus SUV to the parking lot of the hotel where the actress had lodged.

The politician’s two police guards were alleged to have threatened to shoot a female hotel staff who tried to intervene.

His actions were said to have caused an uproar, prompting the hotel management to invite the police who whisked all the parties to the Federal Criminal Investigation and Intelligence Department (FCID) for questioning.

It is understood that Kpokpogri and his two police aides were arrested for “harassment” while Tonto was released.

Tonto Dikeh: If I were the law, I’d make Kpokpogri rot in jail

Later in the day, the actress took to her Instastory to share video clips of police operatives escorting Kpokpogri away into a vehicle.

In a comment box interaction with an interlocutor who questioned her on the controversy, Tonto alleged that the politician had threatened her with an illegally recorded sex tape after earlier putting out her “vulnerable moment”.

“Has he returned my brand new Hilus I bought for him? Shouldn’t he answer to blackmailing me with sex tape illegally recorded or the release of a vulnerable moment illegally recorded?” the actress asked the critic.

“In my opinion, he deserves no mercy. Let the law prevail. If I were the law, he will rot in jail but I’m not.” 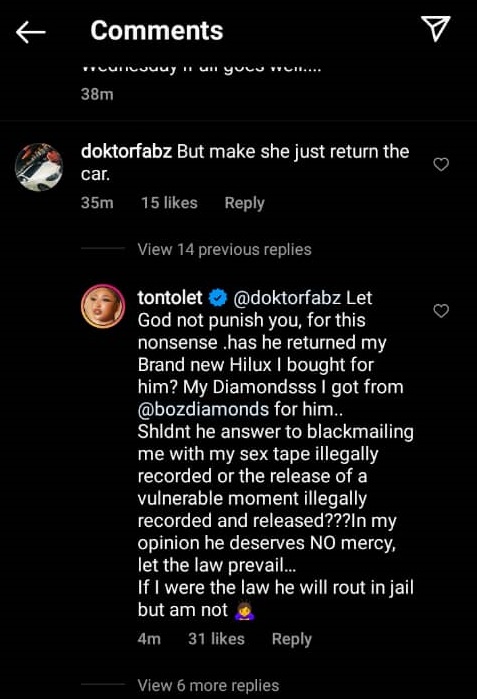 Dikeh had claimed she discovered Kpokpogri had recorded sex tapes of Jane Mena, a dancer, and other married ladies.

Kpokpogri had apologised to Jane but deleted the apology after a leaked conversation, purported to have involved the politician, saw him confess to having sexual escapades with the dancer while she was married.

Jane had also petitioned the inspector-general of police (IGP), threatening to sue Tonto for N500 million.

Burna Boy: I pray Nigerians learn from me… Africa’s future depends on the strength I show