Kizz Daniel arrested in Tanzania for ‘not performing at concert’

Kizz Daniel, the Nigerian singer, has been arrested in Tanzania for his alleged non-appearance at a paid concert.

A video now making the rounds online showed an individual believed to be the singer being led away by police operatives.

Another video showed a disorganised show arena, with concertgoers throwing bottles and other objects on stage.

TRENDING VIDEO: The moment Nigerian musician, Kizz Daniel, was arrested in Tanzania after failing to perform at concert pic.twitter.com/V7bdWlM0Hm

Details on the singer’s arrest are still sketchy but more videos show fans exiting while angrily voicing their displeasure.

It was gathered that Kizz Daniel was to headline a concert themed ‘Summer Simplified’ on Sunday but did not show up.

In a statement, the consultancy firm believed to be affiliated with the organisers of the concert apologised for Kizz Daniel’s absence. 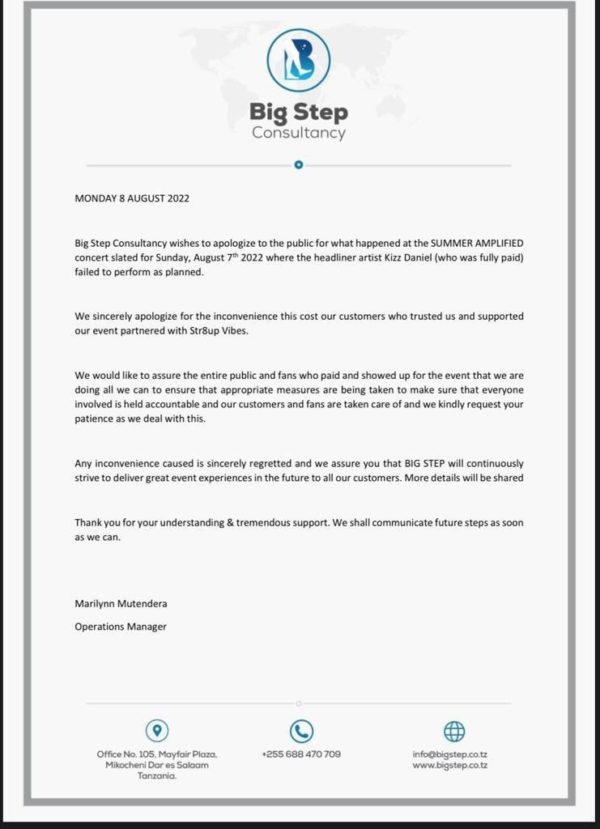 It also clarified that the singer was fully paid in advance of the show date.

“Big Step Consultancy wishes to apologize to the public for what happened at the Summer Amplified concert slated for Sunday, August 7, 2022,” the statement reads.

“The headliner artist Kizz Daniel, who was fully paid, failed to perform as planned.

“Sincerely apologize for the inconvenience this cost our customers who trusted us and supported our event partnered with StrSup Vibes.

“We are doing all we can to ensure appropriate measures are taken to make sure everyone involved is held accountable and our customers and fans are taken care of. We kindly request your patience as we deal with this.”

This is not the first time Kizz Daniel would be on the receiving end of public criticism over a concert.

Last month, the singer was billed to perform at a concert in the United States but showed up hours late.

Enraged concertgoers screamed for a “refund” while booing the singer on stage when he eventually turned up.

He would later apologise while citing delays with the release of his passport in Nigeria.

My 10th album might be my last, Olamide reveals

LISTEN: Davido out with first song since losing two friends

Davido: US detectives searched my house when I first bought it