Kiki Osinbajo: How woman stole N50k from another client at my shop

Kiki Osinbajo, daughter of Yemi Osinbajo, Nigeria’s vice-president, has narrated how a woman stole N50,000 from another client buying items at her fashion shop.

The businesswoman brought the revelation to light in a series of video clips on her Instagram Stories.

In one of the clips, the woman could be seen entering the shop “disguised” as someone who had come to buy some items.

Shortly after entering the shop, she had spotted a purse left on the table by another client who was busy selecting her preferred clothes. 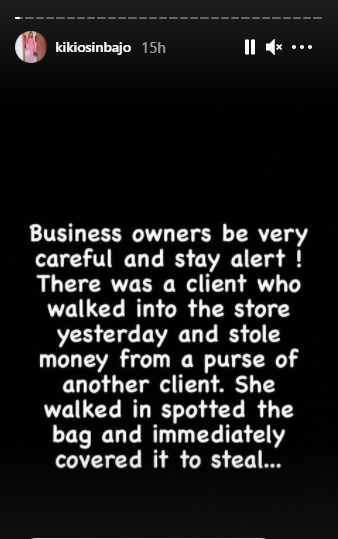 The woman thereafter approached a staff and ordered for some clothes with which she allegedly covered the purse to enable her to carry out the act unnoticed.

She was, however, busted by closed-circuit camera televisions (CCTVs) installed inside the shop.

But when approached, the woman denied the allegations, demanding that everyone within the premises be searched to unravel the culprit.

Kiki said during the search process, it was discovered that she had stolen the amount from the purse.

Citing the incident as an instance, the vice-president’s daughter called on business owners to be more vigilant.

She also revealed that the woman had allegedly stolen from another person’s shop few months earlier. 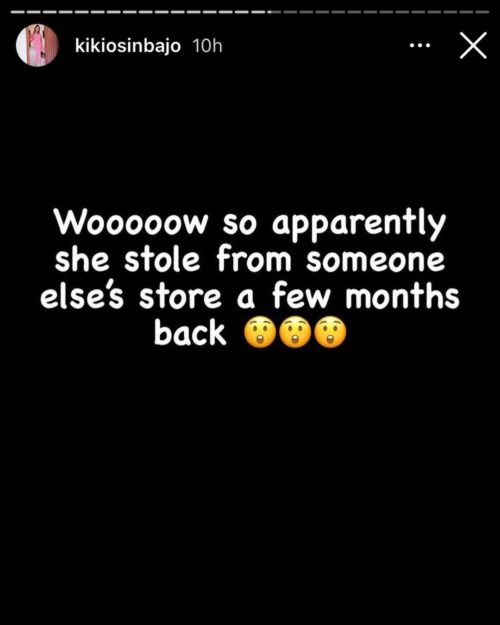 In 2019, Kiki had revealed how she built ‘Glam’d Africa’, her fashion brand, despite the challenges of being “born with a silver spoon”.

Mark Zuckerberg: The energy in Nigeria is amazing

Okagbue, Okike… where are Gulder Ultimate Search past winners?

Outrage as Swaziland king ‘blesses his wives with Rolls-Royce cars’