Justin Bieber, a Canadian singer, has denied reports that he is studying to become a pastor at Hillsong church in New York City.

The ‘Holy’ crooner also set the record straight that he is not a member of the Australia-based celebrity church.

Last week, Page Six had reported that the music star was studying to become a minister of the church — in the wake of Carl Lentz‘s sacking.

Lentz was dismissed in November 2020 for “moral failures.” The celebrity preacher was said to have confessed to cheating on his wife.

A source had told OK! magazine that the singer hopes to help lead Hillsong after Lentz dismissal.

“Justin doesn’t plan to give up his music career, but he feels there’s a bigger calling out there for him,” the source said.

Refuting the claims, the 26-year-old ‘Anyone’ crooner took to his Instagram story on Monday to state that he is a member of Churchome, not Hillsong church.

“And btw Hillsong is not my church… For clarity I am a part of Churchome,” he wrote. 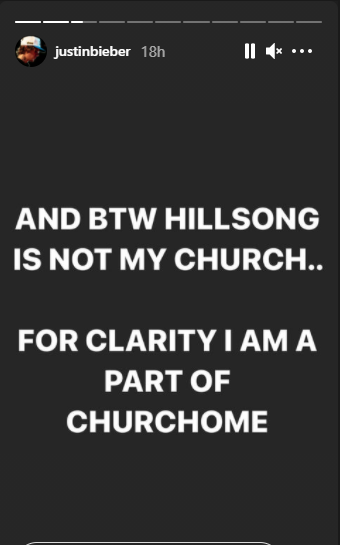 He also shared a screenshot of the Page Six article, while stating that he has no desire to be a minister.

“I’m not studying to be a minister or anything even close to that. Have no desire for that. This is fake news,” he added. 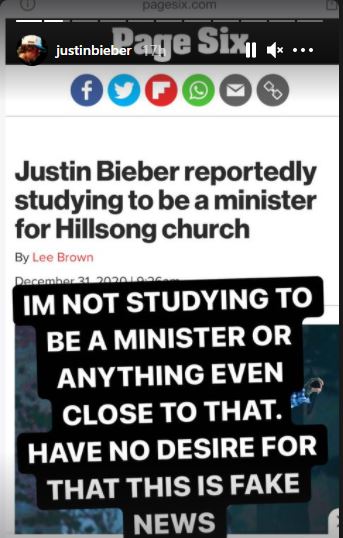 The award-winning singer went on to explain in another post that: “Church is not a place. We are the church. We don’t need a building to connect with God. God is with us wherever we are.”

With several collaborations and numerous accolades, including winning a Grammy award, Bieber has sold over 150 million records and is one of the world’s best selling music artists.

Last year, the songwriter had threatened to sue Danielle, a Twitter user who accused him of sexually harassing her in 2014.

Bieber had also revealed that he was battling Lyme disease, an infectious ailment which affected his skin, health and brain function in January 2020.