‘Is it because I’m feminine?’ — James Brown slams Davido for ‘blocking’ him on IG

James Brown, the controversial Nigerian cross-dresser, has called out Davido for allegedly blocking him on Instagram.

In separate posts via his Instagram stories, the 22-year-old brand influencer said Davido is one of his favourite Nigerian artistes.

He also said despite his love for Davido’s works, the ‘OBO’ crooner is one of those who treats him “like trash for no reason.”

Brown claimed that the singer’s perceived dislike for him may not be unconnected to his feminine personality.

“When I was coming up, there are some Nigerian artist that I love to and vibe to their songs,” he said.

“They don’t appreciate me or repost me because they felt I was trash or alien and don’t know my worth, funny enough one of the artist which is Davido and I’m still on his block list for no reason!! And I hate it cause am a big fan.

“Well I think its because I’m feminine, but Wait oo doesn’t Davido has LGBTQ as fans in US, London etc. Well if that’s so, I just feature in an HBO Documentary covering the life of feminine people and a whole community in Nigeria where I represent the face of Nigeria”. 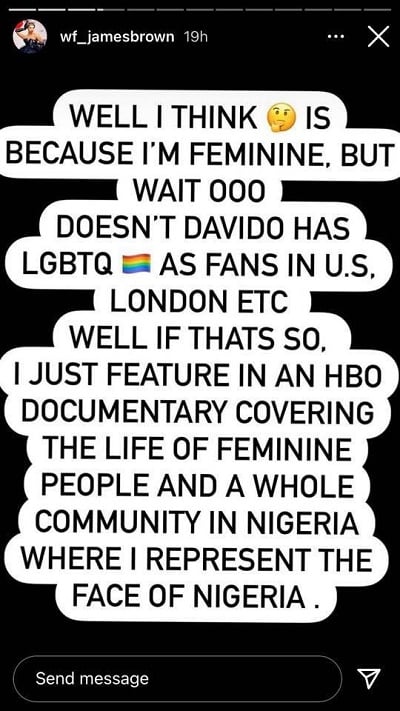 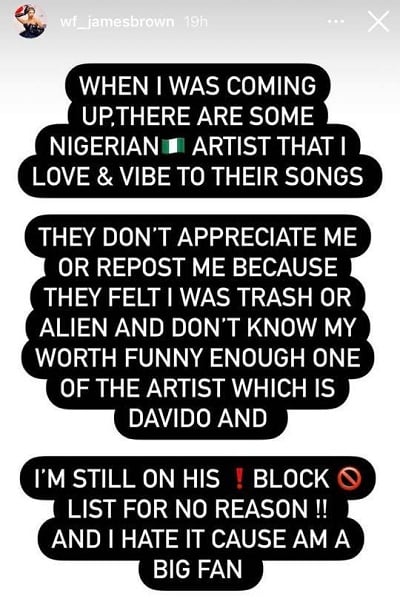 Brown, whose real name is Obialor James, started pulling the weight of fame after a video where he made a grammatical blunder — “They didn’t caught me” — following his arrest years back went viral.

The spotlight had beamed on the cross-dresser on numerous occasions over his feud with Bobrisky, the self-acclaimed transgender.

‘I’ve tried not to like my daughter’s boyfriend’ — Steve Harvey speaks on Michael B. Jordan