The Joint Admission Matriculation Board (JAMB) has been trending on social media over the grammatical blunders it made while responding to complaints from some candidates.

The exam body, while attending to enquiries and complaints from some candidates via Twitter on Monday, “inadvertently” used “Am” in place of “I’m or I am”.

The error became very “costly” and got many startled when the handler wrote “main time” instead of “meantime.”

“Send your ticket number for me to confirm. Am sure you must have been attended to,” it replied a user, telling another complainer that “we would check and get back to you but in the main time send the reference number.” 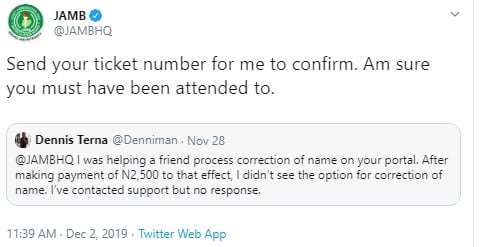 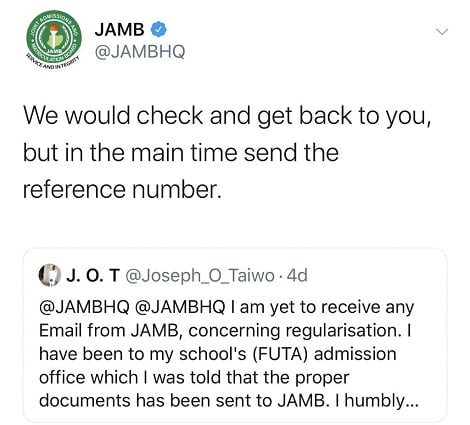 The gaffes did not go unnoticed as some Nigerians took to the microblogging platform to register their different reactions.

As of the time this report was filed, some internet users have adopted hilarious comments and memes to ridicule the handler’s literacy.

“Even jamb doesn’t know the difference between am and I’m,” a Twitter user said.

“Dear JAMB, stop disgracing yourself here. As an organization it should be “kindly send/forward “us” your ticket number for confirmation” not “me” and it should be “I’m” not “Am”. And whoever is running this account definitely failed jamb Lmao,” another user said.

“So you got the balls to fail us in English when you also spell “Am” instead of “I’m” What’s JAMB’S JAMB score in English,” a user asked.

Even jamb doesn’t know the difference between am and I’m 🤣🤣🤣 https://t.co/B2oSob4dxA

It's I'm not Am, The official JAMB handle should not be making this kind of mistake! https://t.co/dBMCPoc9wK

JAMB does not know the difference between "Am" and "I am?" https://t.co/1WYdBzl0uA

If a whole Jamb doesn’t know the difference between “I’m” and “am” then I don’t know where to start my prayer for Nigeria from o. https://t.co/dz5oTb4Id0

Dear JAMB, stop disgracing yourself here. As an organization it should be "kindly send/forward "us" your ticket number for confirmation" not "me" and it should be "I'm" not "Am".
And whoever is running this account definitely failed jamb
Lmao😂😂😭😭😭😭😭 https://t.co/p1pjdWoCmS

JAMB used "Am" for "I'm" but will be setting those evil English questions for candidates. 😔😔😔😔 https://t.co/WPC4D0Sqg3

🤣🤣 even jamb can’t even pass jamb

Jamb using “am” instead of “i'm” tells you all you need to know about the Nigerian system as a whole. pic.twitter.com/bDqA88866z

How does JAMB even have the audacity to fail people when they themselves need to take JAMB again ? https://t.co/7ki3npeyLG

A whole Jamb for that matter “Am" instead of “I'm" and they still fail students. OMG! What a big disgrace! 😥🤦🏿‍♂ https://t.co/l9D8qllpln

So you got the balls to fail us in English when you also spell "Am" instead of "I'm"
What's JAMB'S JAMB score in English? https://t.co/YaaBSDebQP

Even the person handling JAMB is using "Am" instead of "I'm".

We are a joke https://t.co/hJqUIfnog6

I think Jamb was jammed when Jamb wrote Jamb. Am sure you must have been attended to by Oga at the top. 😂😂😂😂😂😂😂 https://t.co/eP5GzGsCxA

I’m not Am
Dear Nigerians, don’t kill yourselves with book… even JAMB NO PASS JAMB 😂😂 pic.twitter.com/wff0ftfVYn