Ireti Doyle dissociates self from daughter’s business amid fraud allegations

Ireti Doyle, the Nollywood actress, has openly declared her non-involvement with a business run by Abimbola Ngozi Onyeulo, her daughter better known as Kachi.

Abimbola, who runs the eponymous Kachi Beauty Products, has severally been accused of defrauding her customers.

An investigation had exposed how the entrepreneur carted away with over N40 million belonging to her patrons after touting a hair business scheme that promised to make wealthy those who joined its wholesale distribution.

The business, which was acclaimed to be an “empowerment scheme”, had attracted many young women and men both in Nigeria and in the diaspora, most of whom trusted Abimbola due to the status of her mother as a prominent actress.

With purchases put in batches, Abimbola had introduced a distributors package. It cost N300,000 to subscribe to the silver category, N500,000 for gold subscribers, N1 million for platinum, and N5 million for diamond subscribers.

However, allegations from over 60 customers since the first quarter of 2021 have put Abimbola’s business in a negative light.

In the wake of the controversy, the 54-year-old film star took to her Instagram page on Monday to deny any affiliation with Kachi’s business.

“I reiterate and write to inform all parties concerned and the general public that I am in no way connected to Kachi Beauty  Products,” she wrote in a disclaimer that has since met mixed reactions,” the actress wrote.

“I do not and have never owned a share, been a director, been on the payroll, or received any financial benefits from said business.

“I have zero affiliation with or interest of any nature in Kachi Beauty  Products and its board/proprietors.

“Mrs. Abimbola Ngozi Onyeulo (nee Ozofor) aka Kachi, the 34-year-old founder of said business, is one of my biological offspring and that is the extent of the relationship.

“In light of the above facts, I implore all persons who have been adversely affected in their business dealings with Kachi to liaise directly with her or the appropriate authorities equipped to deal with such matters.”

OBSERVERS QUESTION DOYLE OVER PRIOR PROMOTION OF DAUGHTER’S FIRM

Doyle’s disclaimer has been received with mixed reactions as she is said to have previously promoted Abimbola’s business on numerous occasions.

After an initial allegation by a customer who alleged they made payments without receiving the promised products, Doyle appeared to have defended Abimbola, saying her daughter’s brand was “nurtured for over a decade with love, tears, and sacrifice”.

In reaction to her fresh disclaimer as the case continues to gain attention, a Twitter user wrote: “Iretiola finally coming out to dissociate herself from Kachi’s business after advertising her products countless times on her page. 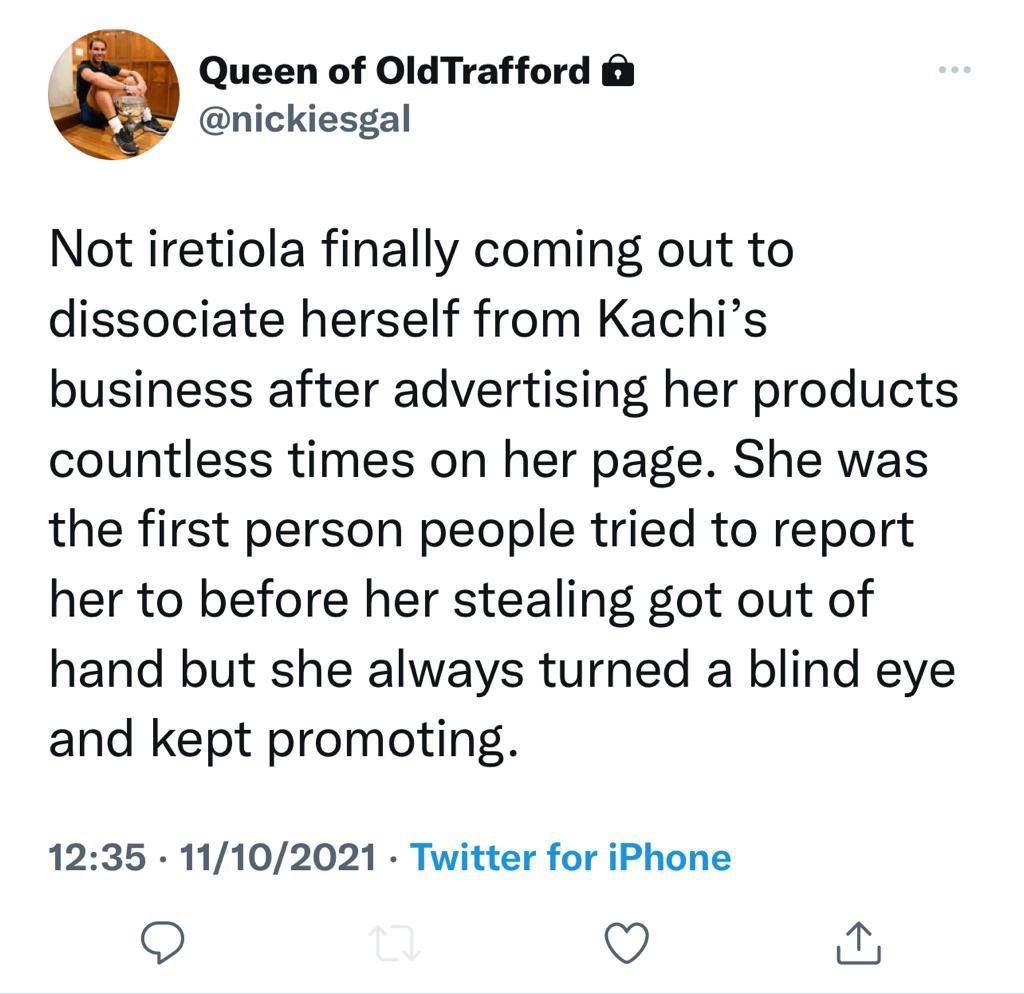 “She was the first person people tried to report her to before her stealing got out of hand. But she always turned a blind eye and kept promoting.”

Another tweet responding to Doyle’s claims in the disclaimer read: “Ireti Doyle said you people should call the police for her daughter and leave her out of it because all she did was give birth to Kachi, full stop.”

Wizkid may have found another Sarz On The Beat

Rema strikes a pose with Jaden Smith for Halloween