In the background of loud music, shutter sounds of multiple cameras, TV presenters in work-mode, and what seemed like the voices of 1000 attendees chatting simultaneously, Femi Branch struts onto the red carpet wearing a short-sleeve Agbada notable for its excess loose-fitting arm fabric. The actor-cum-filmmaker was adjusting the outfit when TheCable Lifestyle’s STEPHEN KENECHI approached him to initiate a conversation about a range of issues affecting Nollywood, including arguments about malpractices and growth, as well as the impact of religion on society and the 2023 elections.

What do you make of claims that Nollywood’s thematic focus caused an uptick in ritual killings?

Whoever is criticising Nollywood for promoting rituals in films is ignorant because it’s only normal that film mirrors life. If you complain that Nollywood is doing too many ritualistic films, we should look back at ourselves as a people. That means we have a problem. We can’t produce films that are contextually irrelevant or that the audience can’t relate to. So if we’re producing films that have ritualistic films as they put it, it’s because that’s what our present reality as a people is. And if you were to confront these claims, I’m yet to see any film that promoted rituals because they mostly never reward the protagonist for being a ritualist. In every film, there is a lesson to be learned.

Whoever the villains are, you see that the repercussions of their actions are always meted out to them. That’s not promoting it. Ritual-themed films didn’t start today. It’s no longer even rampant and that was simply because of the bandwagon effect. It’s a Nigerian thing because the films sold at the time. Others simply explored that theme. But accusing Nollywood of being too ritual-themed is absolute balderdash. Actors mirror society. That’s what the film is about. Only when you’re able to point to films that celebrate rituals do we then have a conversation.

How about such issues as underpaid actors and malpractices in Nollywood? How do we ensure there’s a mechanism holding to account executives in the upper echelon of Nigeria’s filmmaking space?

A lot is already being done in that regard. These atrocities didn’t start today. We once had some actresses come out to say they were victimised by directors. They did name-calling. I’m the south-west vice-president for the Actors Guild of Nigeria (AGN). We reached out to the parties involved to verify the truth. Subsequently, we set up hotlines for the actors being victimised or abused in any way to feed us the relevant details. With that, we will take action.

I’ve had a talk with an executive once and they were dismissive of the AGN in matters of this sort. If the guild has put in lots of effort as you say it has, how come many of these vices still persist?

This is one thing you need to understand. Unfortunately, the AGN is seen as Nollywood. That’s where the problem is. Nollywood is an entire industry comprising actors, producers, directors, costumiers, and lightmen. It’s all of us. Actors are just one part of it. But when any problem happens, they blame the actors guild because we’re the face of the industry. We’re who people see; everybody else is behind the camera. They blame us. That’s why that happens.

Actors being victimised by directors is not an AGN problem. We have the Directors Guild of Nigeria. People should call out the DGN in that situation. On underpayment, they should be calling out the Association of Movie Producers (AMP). They are the producers and it’s their domain. But it’s often the AGN that is publicly crucified. Most of these issues aren’t the AGN’s problems but those of other parts of the industry that the AGN has little or no control over.

And there’s no synergy?

Yes, there is. All the guilds come together and talk, yes. But to now solely blame the AGN for those issues is unfair.

Beyond acting, you’re a filmmaker. Shooting is location-based in Nigeria, where actors work at odd hours. At what point do we get to that place where state-of-the-art studios and VFX are deployed?

It has started. Individual filmmakers are now venturing into that. It’s a capital-intensive venture. Ebony Life did it in Calabar but they had problems I think had to do with the state government. I don’t know the details of that. But there are many things we contend with in Nigeria that can frustrate someone. I’m also aware that Kunle Afolayan is building a film village somewhere around his hometown. I know a couple of people doing similar things. I also have plans to put up the same thing which I won’t disclose yet. A lot of work is going on underground, that I can tell you.

After the pandemic, the whole apartment business came up where people rent spaces for events. Filmmakers keyed into that. Now we have many who are renting apartments to those who can afford them for use as movie studios.

We have more foreign players exploring the Nollywood market, where the likes of Netflix, Amazon, and Paramount constantly seek to deepen their ties with film executives in Nigeria. How do you see this affecting the kind of stories we tell, how we tell them, and the medium by which we distribute?

It’s a fantastic development. More jobs, more opportunities, more exposure globally. I think the more competition there is in the market, the better. Where there’s a problem is when these players come in and pay us lower rates.

When we’re not being remunerated accordingly, that’s where the problem is. I’m trying hard not to mention names.

No, please do. You can. It’s important that these conversations are had, don’t you think?

Ugh! Is it your career (laughs)? The truth of the matter is that these companies have rates for productions done in Europe, America, and Asia. They have a different rate for productions done in Nigeria, not even in Africa. That’s a problem. By the time they pay $100 million to commission a project in Asia or America but pay $10,000 [here], then it’s better you didn’t come at all. You’re making things worse. It’s like you’re saying we’re less. It’s a thing to look into.

The industry is beginning to realise that and people are reacting. A lot of actors, of which I’m one, are beginning to insist. To say the least, we’re also our own enemies in Nollywood. Most of these companies come in and start doing this but they’re not totally to blame. It’s some of our own that would tell them certain amounts are too much here.

And this is just because of the little stipends they want to get. Even when they get these monies, they come back to actors and say it’s not a big-budget film project. They’ll still not pay you what’s on paper that they assured the firms they would. It’s a great thing these streamers are here but, if they don’t do right, it’s better they didn’t come at all. 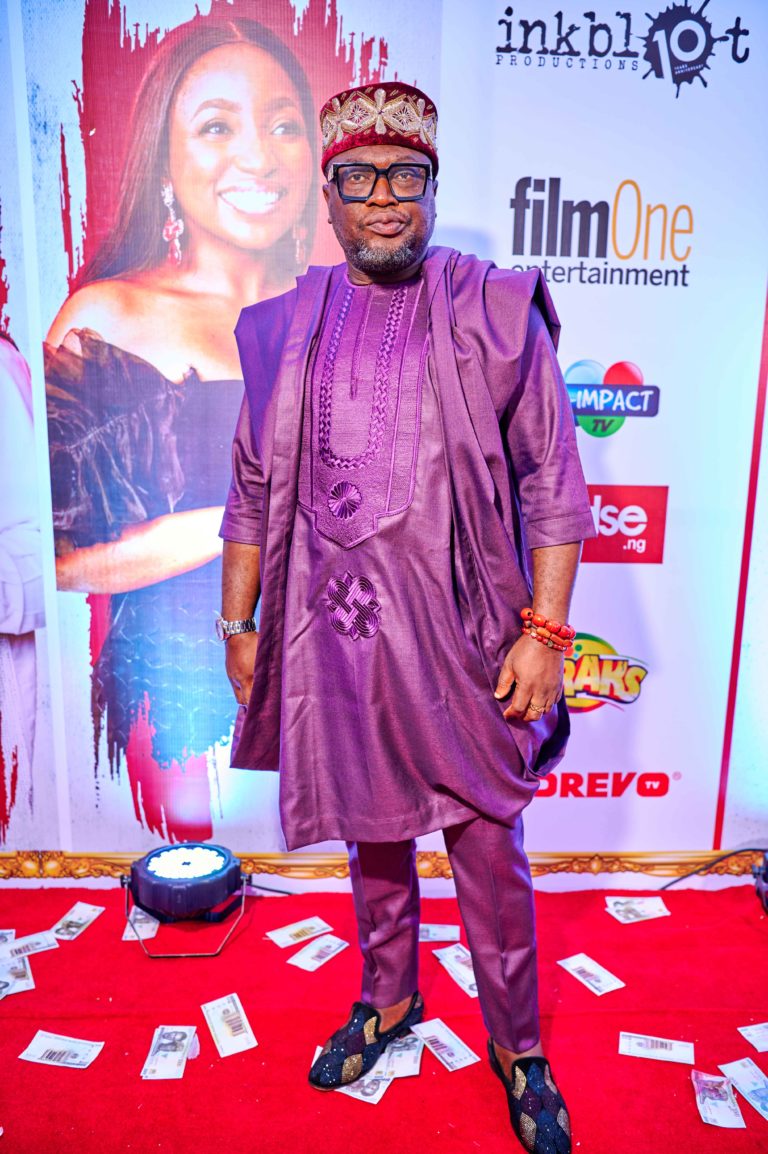 No industry exists independently of the policies and social norms of its host country. What do you make of the place of religion in Nigeria’s sociopolitical context, especially as we’re bound for 2023?

Religion is one of our greatest problems in Africa. We have this slave mentality. I was watching a video on my way here of a pastor coming out of his car. He is put on the chair and lifted by members into the church. Religion is a thing even God has a problem with. We’re subjected to the servitude of our fellow men in the name of spirituality.

You have a problem and the first thing is not prayer but consulting a pastor. Most people worship these clergymen. That’s why we are where we are. These pastors programme their way of reasoning as it suits them. Every little thing, you call your pastor. You have a troubled marriage and the first thing is to resort to the church. You’re living with an abusive partner and common sense is to call it quits. But you don’t leave because your pastor says to stay there.

In the end, you lose your life. Religion is a big problem in Nigeria and it affects us across the board, even in politics.

Tell me, Femi, what projects are you working on?

As you might know, I’m a playwright and poet. I just released my new book, ‘Kunme’, a dramatic adaptation of the story of the biblical Esther. It was adapted into a play text. We just released it and I’m also releasing another in a couple of weeks. We’re going to have these on all platforms where people can buy. My plays are also going to be out.

Before I let you go, what’s your word for Nigerians ahead of the 2023 presidential election?

Many thanks for this question. We have believed over time that our votes don’t count. But I did an analysis after reading an article by someone. If voters don’t count, why do politicians buy votes with so much money, spend time eating amala at local restaurants, and buy roadside snacks from the poor? If they had the power to swing elections however they want, they won’t try to get closer to the people. The propaganda of votes not counting is what the political elites sold to us somehow. Your vote bloody counts. There’s a limit to which they can rig elections.

They deceived us for years to make us think votes don’t count. Get your PVC and vote for your preferred candidate.

VIDEO: Davido flies Nigeria’s flag at Made in America festival

AY: My shows are always sold out, yet they say my jokes are dry