It rained cats and dogs that morning, but a trip had to be embarked upon; nothing could stand in the way of the promise of Ikogosi warm spring and expectations of Erin Ijesha waterfalls.

The beauty of nature and serenity of its ambiance would not be deterred by the weeping sky, a recent regularity in Lagos.

With that mindset, I braved the elements, brushed off the relentless rain and made it down to the meeting point – to meet with my co-travellers.

After a 2-hour wait for the rain-delayed fellow sojourners, we headed out on a trip facilitated by Google Photos.

Having had prior experience of a similar trip with some of the same company, I made wiser seating decisions on the jet-on-wheels; I chose the compartment closest to the sleeping area.

The journey of hours had series of highs – which included games, exciting banter, lots of laughter, and acquaintances, which were easily made bereft of inhibitions.

Later, there would be some sleeping, quiet chats, junk-eating, social media updating and work, for those who cared to.

Outside, people became landscape, then to empty expanse of lands, later woods, hills and sometimes trees.

On and on, this continued for hours.

Such was the sight-routine of the journey to the nature freaks while inside an equally chilly bus, anticipation and excitement seeped through like a virus embracing willing prey with great verve.

The promise of the hike and sights to behold could not be more pronounced.

Erin-Ijesha has seven steps which create multiple cascades of water pouring over a precipice.

In anticipation of such a sight, we disembarked with bated breaths as we pulled up at the gated hill-surrounded waterfalls.

In the year 1140 AD, Akinla, founder of Erin-Ijesha town and a granddaughter of Oduduwa, discovered the falls.

This happened during the migration of Ife people to Erin- Ijesa.

As one forges into the deep of the falls, the atmosphere becomes cooler and several trains of water can be seen flowing through the rocks, contributing its quota to the scenery.

Once you approach a fall, you’re faced with a bliss indescribable and an aura, too soothing to be contaminated by any form of pollution.

At that moment, every iota of stress, weight, and burden evaporates from your body and you feel as light as flailing feather.

You are more relaxed than you’ve ever been and equally impressed by the intimidating falls.

Legend has it that the fall is a living spirit spewing water from several mouths.

Ogangan, a farmer, many many years ago married two wives who never saw eye-to-eye; Awele was hot tempered, while Awon was calm, demure.

Failing to agree on anything, one day they got into a fight using their magical powers, and they eventually turned into water, says the Legend.

Awele became the warm water while Awon is said to be the cold water at Ikogosi.

Upon getting back to see what had become of his wives, Olosun transformed into a rock to guide them. Olosun is the hills surrounding the spring.

Of course, there other myths associated with the warm spring: one says a hunter discovered the spring while on an expedition and upon his return to the village, he reported his finding.

Subsequently, the community started worshiping the water because of its supposed therapeutic and curative ability.

In the 1960s, Tai Solarin, late Nigerian educator and author, after taking his students to the site for a tour, urged John S. McGee of Baptist church, to build a students’ camp around the area.

McGee, a Southern Baptist missionary, against all counsel visited the source of the hot and cold springs.

“After seeing it, I felt that it could be used for a good purpose. I discussed the possible use of it with some of the Mission and (Nigerian Baptist) Convention friends. With the growing interest of Royal Ambassador work, and youth work, we felt that it could best be used by building a Youth Camp. I took it up with the Ekiti Association and we decided to build a camp for our R.A.s and G.A.s”, said an account given by McGeee, who was based in Igede, a nearby town.

What McGee built would be named Baptist “Warm Springs” Camp but when his family left Nigeria, the property was sold to the Nigerian government for N300,000 in 1978. 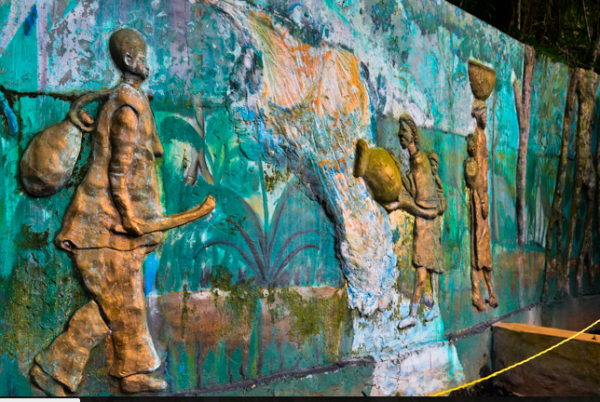 The warm spring has a temperature up to 70oC at the source and 37oC after meeting the cold spring at the confluence.

GTBank Fashion Weekend to showcase Africa’s finest to the world

I was denied entry into Cote D’Ivoire, says tourist riding bike from London to Lagos