I didn’t abandon Risikat… I married her because of her blue eyes, says husband

Abdul-Wasiu Omo-Dada, husband to Risikat Azeez, the blue-eyed woman alleged to have been kicked out of her matrimonial home for her features, has denied doing so.

Risikat had made headlines after Omo-Dada was said to have sent her packing from their home alongside her two daughters after she birthed them with blue eyes.

But in a chat with Punch on Tuesday, Wasiu said his estranged wife left his home out of her own volition, adding that he started having troubles with her over her “wayward” behaviour towards him.

He also said that Risikat, whom he claimed wasn’t content with what he offers her and the kids, had “blackmailed” him by putting up pictures of herself and his kids on Facebook to “beg for alms”.

“It was because of her eyes that I fell in love with and married her. Her actions towards me like waywardness and telling me I wasn’t being good to her caused the trouble. I did things for her she denied; I’ve been providing for her and the kids to the knowledge of her parents,” Wasiu said.

“But they’re not satisfied. They posted pictures of my children on Facebook, using them to beg for alms. They said I didn’t give them food. After marriage, our relationship had progressed. We even wore outfits made from the same fabric. When she gave birth to our first child, I paid N35,000.

“When she came to my house, we never used to stock the pantry with yam floor but we ate as though we did. Even when I’m returning home after the day’s job, I would buy snacks and we eat. For her to now turn around and tarnish my name everywhere, well, I accept it as the will of God.

“I couldn’t leave her because I loved her. With all the blackmail, I didn’t beat her. I never used to make things hard for her. Sometimes she cooks and wouldn’t make mine. I’d get bread and attempt taking stew but she would snatch the pot from me. I end up dipping bread in water for dinner.” 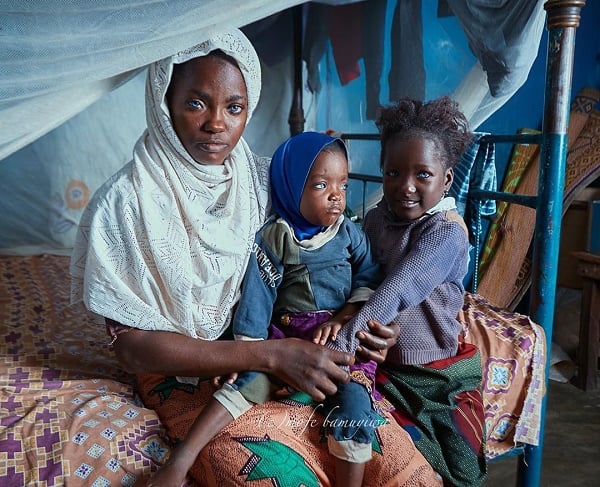 Refuting Wasiu’s claims, an elderly woman who was identified as Risikat’s mother, recounted the experience she had after she gave birth to her daughter, admitting that doctors thought it was an eye condition.

She said Wasiu loved her daughter when they first met but alleged that it was the words the man had heard from his parents that later prompted a nonchalant behaviour towards his family.

“When I gave birth at the hospital, the doctors saw her (Risikat’s) eyes and wondered if it wasn’t cataract. I was scared but they reassured me they would refer me to the Teaching Hospital. She grew up and when her husband saw her, he decided he wanted to marry her,” the mother said.

“For about a year, they didn’t have a child. But when she eventually got pregnant, he stopped taking care of her. When it turned out the baby had blue eyes, he stopped caring for them. At a point, my daughter left. Then, he later came begging. I never gave birth to my children from different men.

“Given that I didn’t want my daughter to have children from different men, I begged her father and the elders so they would allow her to return to his house. When she got pregnant again with twins, he refused to take care of her. He couldn’t even pay the hospital bills or say where she gave birth at.

“I was the one taking care of her; she comes from her husband’s house. When she birthed the twins, the first had his father’s eyes while the second had his mother’s. The first lived for about four months before dying. Wasiu’s father asked him if he was only going to have kids with blue eyes.

“He said that was the reason, he didn’t take the kids. They planted these thoughts in Wasiu’s mind and he stopped caring for his family. I discovered the kids were getting emaciated and Riskikat said he refuses to provide. We realised he didn’t have interest in her, so we went to pack her things.”

Olufolake Abdulrazaq, the wife of Kwara state governor, had sought to meet the embattled mother of two so as to empower her ahead of a possible reunion with her family.

Five options to consider when an ex-lover comes begging