Glory Osei, Nigerian entrepreneur, has set the Nigerian Twittersphere abuzz after she claimed to have made more money from selling slim tea than Jay Z, American rapper, did from supposedly ‘selling drugs’.

After being accused of fraud and maltreatment by her alleged former employees on Twitter in October, the self-acclaimed serial-entrepreneur made a brazen come back on Monday with a 182-tweet long epistle.

In one of the tweets in the thread, Osei claimed to have sold a lot of slim tea and made more money than Jay Z did “selling drugs.”

“Jay Z sold drugs, I sold slim tea, I mean, I sold a lot of slim tea. Good chance, I made more money than Jay Z did selling drugs,” she wrote.

“But that was story, and the sad part is, I had always wanted to write a book about it. To help the next person.” 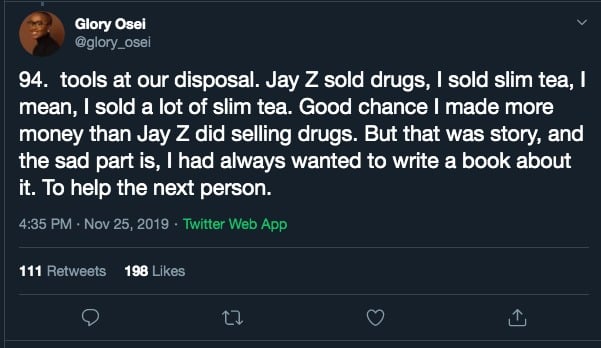 That particular tweet did not go down well with quite a number of Nigerian internet users and they have since been pouring out their different views on the microblogging platform.

“Glory Osei said she made more money selling slim tea than jay z made selling drugs. I hope jay z sold her the drugs personally because I don’t know where she’s hearing her own gist,” a Twitter user said.

“In summary, Glory Osei said she did that sh*t and we can’t do sh*t cos she’s richer than all of us,” another user said.

I hope jay z sold her the drugs personally because I don't know where she's hearing her own gist.

Someone said that Glory osei thread be like Ababio &Anyakoha all together😂😩 pic.twitter.com/6x9N6QwlHr

Instead of Glory Osei to announce her comeback with a single ogbonge giveaway tweet then relax and watch people jump on her dick again, she is busy writing one of the longest okoto threads I've ever seen in my life.

In summary, Glory Osei said she did that shit and we can’t do shit cos she’s richer than all of us.

I can't even read the night before my exam and you expect me to read that Glory Osei thread???

So Glory Osei took her time to write Waec Essay and nobody wants to read it. You people are rude o 😂

I felt like landing her a heavy slap on her bald head, then i figured it definitely has to be crack. Not her fault.

Glory Osei is telling all her feminist minions that worshiped her "fuck you" for being disappointed she's married and misleading them.. The whole clan filled with clowns must be mad confused right now.. Lol

But the ultimate flex Glory Osei can ever have is if she ends the thread in number 419.

Even I will be in her side.

This is high level of madness 😂😂 pic.twitter.com/mfq4lj7y7c

Somebody get me @glory_osei I need an eye to eye conversation.
A tea or anything she wants to savor, while I stare at her eyes.
The devil should wear prada already.

I thing I give @glory_osei, she got guts! You truly need that to take shit to the next level in 9ja, but admitting all that is now another conversation.#gloryosei

I have been on twitter since 2016… I have never seen any human do a 120 page thread in my entire 4 years here.

Glory Osei definitely did that shit they accused her of.

Madam do giveaway and say sorry…. it will end.

She must have sold an entire continent of green tea…

Ogbeni Dipo, Aproko Doctor, Dr Funmilayo are the king of Thread but this Glory Osei’s Thread is not a Thread oo, This is Rope from Lagos island to Mainland.. kilode, Williams scamsphere!

Glory Osei wrote the longest thread twitter has ever seen explaining something and then said she doesn’t owe twitter an explanation.

Glory osei said she doesn’t care about us and that our opinion doesn’t matter to her but she’s writing script for wale Adenuga on twitter.

You love to see it.

I feel like Glory Osei purposely decided to write a long thread so we can all banter about how stupidly long it is and leave the actual issue of what she did cause she knows we ain’t gonna read that shit !

Glory Osei took a long break from Twitter, hired some from Twitter to help her compose that long ass thread as a content creator. Sad thing is that she won't pay him. She's testing patience 🤣

“If you want to hide a secret from a black man, put it in a book”

If you want to hide salary from Nigerians, put it in a Twitter Thread

Six ways to keep your kids learning, entertained while schools are closed