Foluke Daramola, Nigerian actress, has dismissed allegations that she siphoned funds donated to her foundation to support Yoruba movie veterans in need of financial help.

In the expletive-laden post, the user had called on the movie star to “do the needful with the money if she does not want to die” while also tagging her a “husband snatcher.”

But in a strongly-worded response, Daramola dismissed her accuser’s claims while cursing her for attempting to smear her reputation.

The movie star also explained that she does not receive donations from anybody to support her foundation as claimed, adding that she only gives out her hard-earned money.

“May God punish you for the stupid comment you just wrote except someone is giving me money on what I am doing. If not, your whole generation will die miserably before the end of this year…,” she wrote. 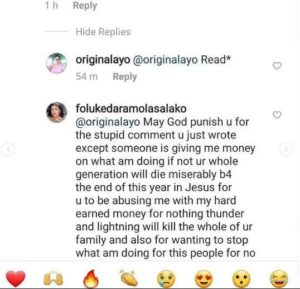 The actress also spoke in an Instagram video thereafter wherein she enjoined the public to disregard the claims.

“I’m going to put some things straight for the last time. I did not collect money from anybody. I run my foundation from my own money. Those who claim otherwise should come forward with their evidence and if they don’t have it, they should desist from posting stupid messages because the wrath of God will fall on you,” she said.

“I don’t have business with anybody. What I’m doing, I’m doing it because it’s what I love to do. How much am I even giving them for Christ sake that people are accusing me of collecting money? I give as little as N5,000 and N10,000 to old people depending on what I have with me at the time.”

Daramola dared anyone who has evidence of the alleged diverted funds to come forward, adding that “the wrath of God will come upon them” if they can not prove such eventually.

“I don’t understand where all this is coming from but wherever it is coming from, just know that the wrath of God will come upon you because I don’t wish anyone evil. Please stop all this madness. I don’t have business with anybody,” she added.

“I challenge anyone that says I have collected money from him or her to come and tell me how much they gave me and the time. Nobody is giving me any money. I’m doing it because I love. If anyone wants to give me money to support it, fine but till now nobody has given me anything.”

Rihanna’s Fenty fashion line to be shut down

A conversation between Omotola Jalade-Ekeinde and her ‘spiritual son’