Feminist Coalition: Our #EndSARS fight is also for homosexuals, transgenders

Feminist Coalition, a group that has been offering administrative support to #EndSARS protests across the country, says its campaign is also advocating for the rights of queer people.

In a now deleted tweet on Sunday, the group said lesbian, gay, bisexual, transgender and queer people are also assaulted by the police.

“Our communal fight to #EndSAR is inclusive of the LGBTQ+ community who are also harassed, assaulted and killed by police. They deserve the same justice we seek and even more so, as they are also a target of the law. You can’t be what you fight against,” it wrote.

“We stand with every single one of our queer brothers and sisters in this fight against police brutality.” 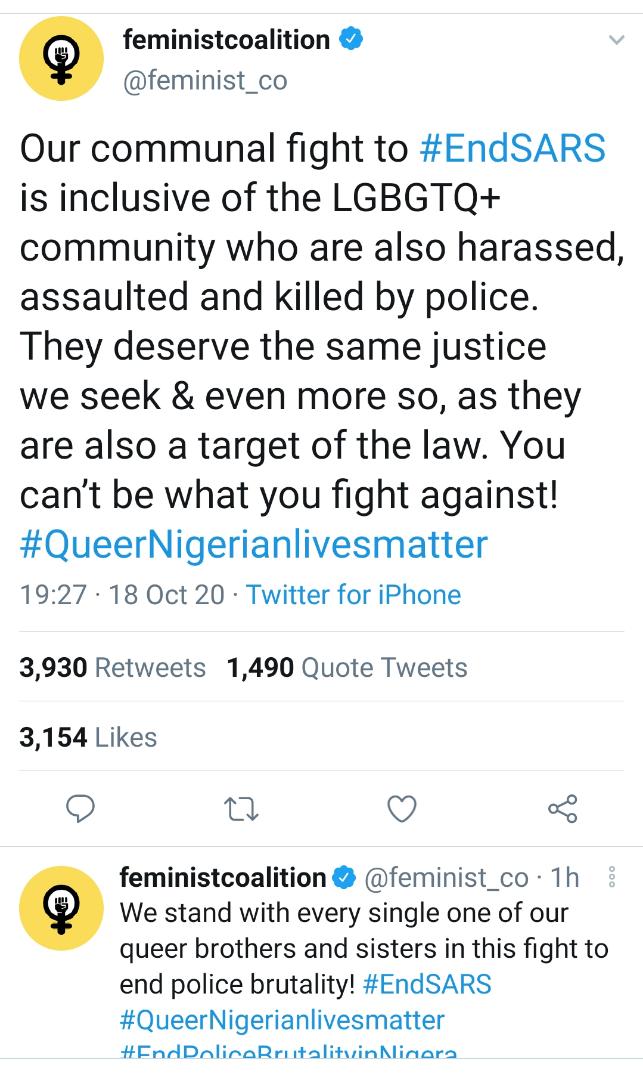 The tweet generated mostly negative reactions as many Nigerians were of the view that the struggle to end police brutality should not be divided along sexual orientation.

In a fresh tweet, Feminist Coalition has now said it is committed to the elimination of violence against all Nigerians and asked that everyone focus on the single goal of campaigning against police brutality.

We are committed to the elimination of violence against all Nigerians, and our demand for accountability from the government is simple: that all Nigerians across this nation live and thrive. Every Nigerian has the right to protest freely against police brutality. #EndSARS (1)

Here are some of the reactions to the tweet

Feminist Co should not have written that tweet if they would end up deleting that tweet.
What message are you sending to everyone?
Particularly those who never asked you to tweet your support, yet u had their hopes up.
It is just one kain all round.
No start am if u no get mind!

Kindly call this what it is. This is NOT #EndSARS Movement but an LGBTQ+ and Feminist Movement. Stop impersonating & exploiting the vulnerability of Nigerians, who genuinely wants to end impunity. This agenda is dead on arrival. There is no place for insurrection in Nigeria! https://t.co/o25nXbPebh

When you have a collective agenda, please stick to it. A selfish move ruins everything.

Anyways, just like the work of salvation; everything was paid in full. So, if the devil has any place in your life, you gave it to him.

If we derail #EndSARS, we did it to ourselves.

It should be obvious.

Johnny Nash, ‘I Can See Clearly Now’ singer, dies at 80

[SISI WENDY] Is she just being nice or flirting with me?

‘Condoms have reduced in BBNaija house’ — Maria raises the alarm