Fani-Kayode in war of words with Church of Satan

Femi Fani-Kayode, a former minister of aviation, was earlier engaged a hilarious banter with The Church of Satan on Twitter — and it has since gone viral.

NAN reports that Fani-Kayode had mentioned the church in a now deleted tweet which they responded to, leading to an argument on the social media platform.

The Church of Satan had said: “She has nothing to do with us, please leave us out of this.”
Fani-Kayode responded: “Get thee behind me satan!”

The church replied: “That doesn’t actually work. We are right here in front of you telling you that you are making false, unfounded accusations and asking you nicely to please leave us out of this as it has nothing to do with us.”

Fani-Kayode said: “In Jesus name I bind you and send you to the desert places.The devil is a liar:he was a liar and murderer from the start and the father of lies.”

“You claim she is not ur member and u expect me to believe u. Make your list of members public and prove me wrong. Stop disowning ur own!” 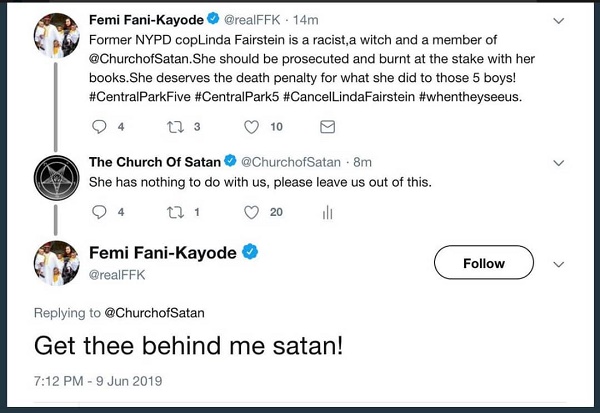 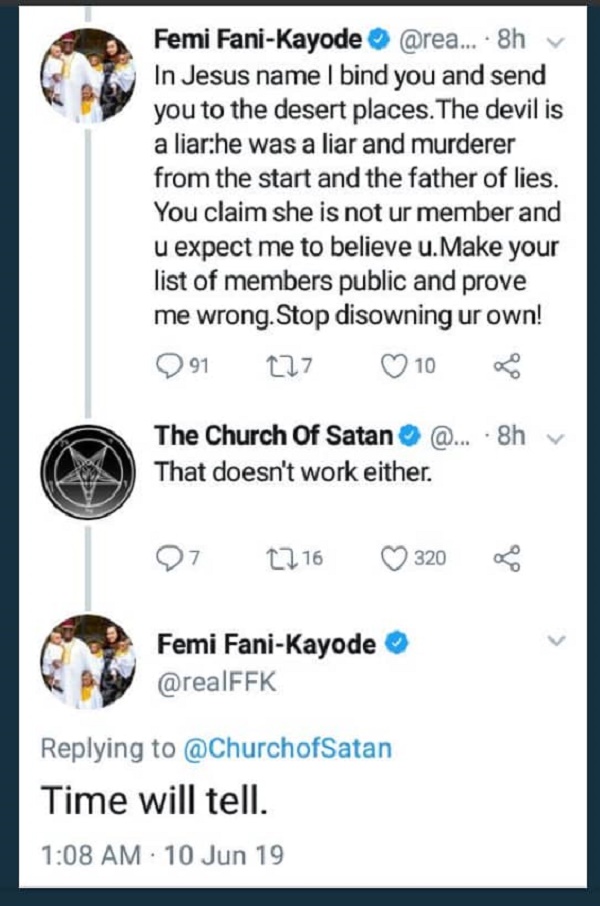 The argument has since gone viral on social media and commentators are sharing their thoughts on the conversation.

@Ayoolapezion said: “What I just like about him is his brilliance. The guy is fantastically brilliant.”

@Momyaurri said: “Hahahahahaha yeah right. People who want their membership to be known will make it known.”

‘AYOOLA’, an exhibition of abstract art, to show at Rele Gallery

‘Leave our country’– S/Africans wage war against Nigerians on Twitter

EXTRA: ‘Christians who watch Game of Thrones are at risk of going to hell’

COVID-19: Thailand to give citizens 10GB of mobile data monthly from April