The secret service agent often spotted in the company of Hillary Clinton, US Democratic party presidential candidate, has been erroneously reported to be a Nigerian neurologist.

Neurologists diagnose and treat disorders of the brain, spinal cord, peripheral nerves, muscles, and the involuntary nervous system that controls the heart, lungs and other organs.

As the contest for the US presidency goes to the wire between Clinton and Donald Trump, concerns have been raised about her health in recent months.

These concerns got to a head a week ago when she left the 9/11 memorial prematurely after feeling “overheated” and almost slipped while about to enter the vehicle which conveyed her out of the vicinity.

TODD MADISON – NOT NIGERIAN, MAYBE NOT A DOCTOR

The agent rumoured to be her doctor, is always within close proximity of Clinton, especially during the Democratic National Convention (DNC).

Rumours of him being Clinton’s doctor in the disguise of a security aide, emanated after he was photographed with a Diapezam pen.

Diazepam auto-injector pens are used for for acute repetitive seizures.

Another proponent of the ‘doctor rumour’ was Mike Cernovich, an author who however, didn’t imply that Clinton’s aide is Nigerian.

Cernovich simply maintained that the former US secretary of state goes about with a private doctor, owing to the “medic badge” on his lapel.

“The media is completely covering up this story. We will continue to investigate it aggressively. By the way, my journalism is entirely self-funded”, he said. 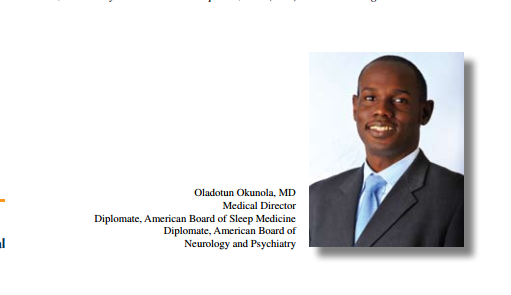 Okunola, who graduated from the Howard University College of Medicine in 2001, is affiliated with Morristown Medical Center.

AHSCs, which is the largest accredited sleep centers in the tri-state area, has offices at Overlook, Morristown, and Goryeb Children’s hospitals.

Okunola is also a member of the prestigious Neurology group, Neuroscience Center of Northern New Jersey.

As part of his fellowship training in clinical neurophysiology/epilepsy, Okunola focused on intraoperative and epilepsy monitoring; EEG and EMG.

Ali Baba: How INEC can make its operation digital — and save huge costs