Mlekeleli Masondo, a South African man, has narrated how he posed as an online lover to discover his wife was allegedly cheating on him.

In a Facebook post, Masondo said it all started about four weeks ago when he used a “fake” social media account to initiate a conversation with his wife.

Unaware that she was conversing with her own husband, Masondo said his wife had agreed to date her supposed new lover (him).

He said his wife spends hours chatting with the new lover every day and would even send him airtime and money.

He said his wife told her new lover that she was happy with her husband (Masondo) and was merely cheating for fun.

Masondo said both have agreed to meet at an undisclosed location on November 11 — a development which had made her deny him sex for over a week ahead of her planned date with the said lover.

“My wife met someone on Facebook, their thing is going on for almost for weeks now. The guy is unemployed, as soon as I leave for work they start chatting, she sends him airtime and money,” he wrote.

“Last week she told me about her sick aunt and she needed money to send to her, it was a lie, she sent R500 to her guy. She told the guy that she is happy with me and she is doing this just for fun.

“They spoke about sex and they agreed to do it on their first date, the guy told my wife not to have sex with me for at least one week before the day because he wants her fresh, from last week she is telling me that she is not ok to sleep with me.

“They will meet on Thursday and she doesn’t know that I am the new guy with a fake account.” 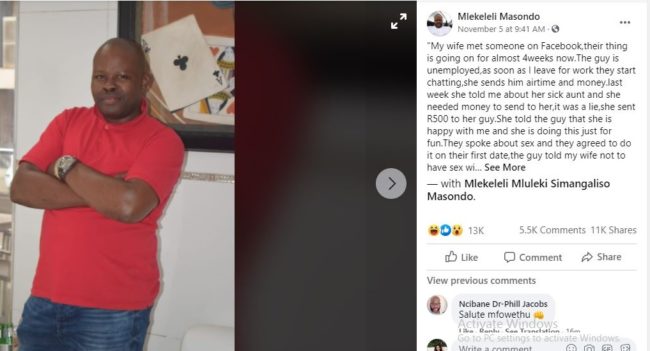 As of the time this report was filed, the post has been shared over 11,000 times with some users taking to the comment section to air their different views on the man’s decision to trick his wife.

In a follow-up post, Masondo said he is taking the measure “to protect his family.”

“It is my natural and personal duty to protect my family. I intend taking all necessary decisions and actions to do that,” he added.

POLL: Is foreplay important to you during sex?