Mary Lazarus, the Nigerian actress, says she is willing to collect money from any politician seeking a vote.

In a post via her Instagram story on Monday, the film star also said she would be more excited to accept the money if the politician has occupied a political office before.

Lazarus, however, said she would not allow such monetary gain to influence who eventually gets her vote.

The actress argued that people should not reject such incentives, which she described as “national cake.”

“If any Politician gives me money to vote for him/ her…. I will gladly collect the money…. Na my money… Especially the ones wey don rule before…. But I go use my head vote. #DontRejectTheirMoneyOrGifts #nationalcake #nationalbudget,” she wrote. 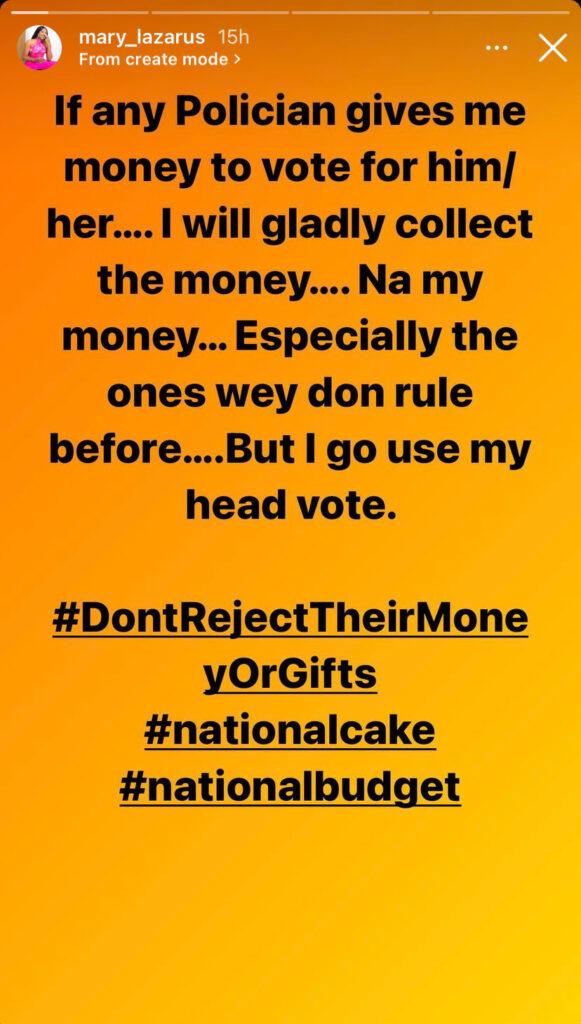 Her post has continued to attract a chorus of condemnation from Nigerians on social media.

Reacting in a lengthy Instagram post, Chioma Ifemeludike, another actress, said it is “unfortunate that some of these celebrities are negatively influencing our society.”

“Whoever thinks that taking money from a politician and not voting them is smartness is just really dumb, why do you even need money from someone you don’t want to vote into power?” she queried.

“That’s greed, shows lack of integrity and exactly how we got here. This same hunger mentality is why young girls date multiple men, faking love just for the money. We’ve successfully killed trust, truth and commitment in Nigeria and we dare talk of a better society?

“My people say if you reject the devil, you reject his evil works. This is a primitive and archaic mindset and it’s unfortunate that some of these celebrities are negatively influencing our society.

“You can’t hear an average American, Chinese or European celebrity publicly say they will take money from a politician in exchange for votes. We need to understand that if we must rebuild Nigeria to be great then we must bury our hunger mentality and quest for national cake.

“Biko anytime we wish to talk about governance and politics let’s endeavour to send the right message, this is the only country that’s originally ours, if we fail our children’s children will suffer it.”

Naira Marley: Our govt is creating conditions for trouble by neglecting youths

INTERVIEW: Who is Falana?