Etinosa: I don’t know if to tell my friend that her man is gay

Etinosa Idemudia, a Nollywood actress, says she is unsure if she should rat out the male partner of an undisclosed acquaintance of hers who she claimed is gay.

She took to her Instastory on Wednesday to reveal that her friend seems not to be aware of her partner’s gay status.

“Someone recently announced her relationship in the house but a few of us know the man to be confirmed gay. I don’t know whether to tell her or mind my business and leave it to God,” she wrote.

“I mean he makes her happy, according to her. I want to assume that they have been in bed together and he made her happy in that department too. My conscience is all over the place. It is well. The mysteries of life.” 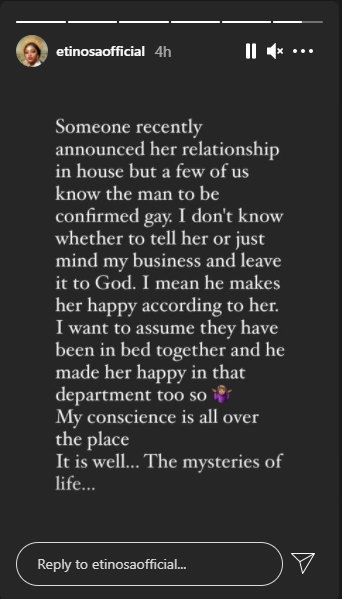 Homosexuality is prohibited by law in Nigeria and offenders could bag a 14-year sentence if convicted.

The law, which was introduced in 2014 by the Jonathan-led administration, has continued to stir heated controversies among Nigerians on social media.

In 2019, Etinosa fueled public outrage after she went unclad during a live video session by Mc Galaxy, a singer.

Eldee: Why I gave up on Nigeria, stopped music

‘Stop lying up and down’ — Fatoyinbo hits back at Busola Dakolo