Emma Nyra: Why lots of people are happy about Hushpuppi’s downfall

Emma Nyra, American-born Nigerian singer, has aimed a dig at people who appeared to be happy about the downfall of Hushpuppi, an internet celebrity.

The Dubai police had apprehended Hushpuppi in a special operation dubbed ‘Fox Hunt 2’ over cyber-fraud involving 1.9 million victims to the tune of N168 billion.

His arrest had set social media abuzz with many bashing him for painting the country in a bad light.

Weighing into the conversation, the actress and model said a lot of people are happy about Hushpuppi’s downfall because he was fond of “oppressing them on social media”.

In a now-deleted post, the singer, born Emma Chukwugoziam Obi, however, said such excitement would not fetch those happy any fortune.

“A lot of people are happy about what happened to Hushpuppi because he was oppressing them on social media,” she wrote on Twitter.

“The truth is that rejoicing in his downfall is not gonna put money in your pocket. I’m tired of reading about someone else’s downfall. Let me jeje hustle my own.” 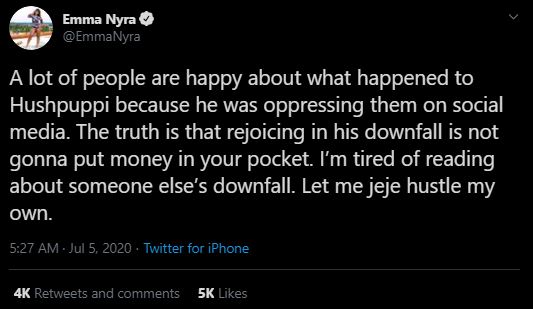 TheCable Lifestyle had reported how Hushpuppi, whose real name is Raymond Abas, was extradited to the US from the United Arab Emirates (UAE).

He recently made his first appearance before a US court where he is being tried for the conspiracy to commit money laundering. Hushpuppi could get a maximum jail term of 20 years if convicted.