Victor Ebiye, a comedian, has come under heavy criticism for saying Aramide offered sexual gratification for her Headies win.

The singer beat a strong male-dominated field to win the best alternative song award on Saturday. 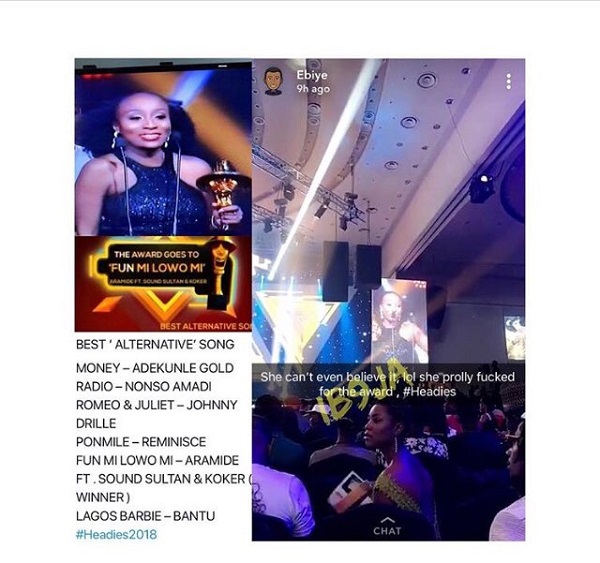 He later apologised by saying: “I made a distasteful joke about Aramide last night at the Headies. I am embarrassed by my comments, I’m profusely sorry.

“Aramide is a hardworking artist who deserves every recognition she gets by merit. I sincerely apologise and pledge that such will not repeat itself.”

In spite of his apology, many Nigerians on Twitter descended heavily on him.

Ebiye should apologize unreservedly for the nonsense he said about Aramide.
I don’t see anyone saying such about Wizkid or Davido. Yet people say women aren’t unfairly regarded in this country.

Today we formally hand over Comedian Ebiye to the womenfolk to have him for dinner.

We believe that women work as much as men in the fields they compete and Aramide earned her award.

Ebiye is on his own

After planting seed's in people's mind about her Character, this Ebiye now wants to apologise. Utter rubbish!

You're expecting us to just move on cos Ebiye "apologized" and you're right. But think of yourself in Aramide's shoes, having to work hard every single day to make beautiful music only for one person to say she had to sleep with someone to win. An insult to her and her marriage.

Ebiye has apologized, and while I feel that apology wasn’t good enough, I hope it‘s just one of a long list of things he‘ll do to be a better person. He must also purge himself of whatever inspired that kind of thinking, because out of the bottom of the heart, the mouth speaketh.

Ebiye the Comedian’s tasteless comments about Aramide’s The Headies award is unbecoming of a public figure, apology or not. You can’t make trash comments and then run and hide behind an apology. For me his comment is tantamount to defamation. It should come with consequences.

It is important to note that Ebiye is being called out by men (too). This will come in handy when some people try to paint all men with one brush and tell an obvious lie.

Ebiye is a fool.
He didn’t make a “distasteful comment”
He made a “grave accusation”
And should answer for it.

People should learn that apology doesn’t overturn everything.

Maybe then they would understand how consequences work and put some thought ahead of their statements.

I am late to the party but I see Ebiye has apologised on his page. We still have a long way to go on this conversation around women and using sex to get ahead. No one will ever make a joke that a male artiste got an award by sleeping with the organisers. Sigh!

Comments like the one Ebiye made, you gotta wonder; If you were not put on blast, would you apologize?

You know that deep disappointment and anger you feel when someone you like a lot and hold in high esteem fucks up incredibly? I have felt that twice in the last 24 hours. Ebiye. And someone I won’t mention because he is still being accused of sexual assault.

It's really hard for women to make a name for themselves in the music business.

They will work hard & win awards, only for one washed up Instagram side attraction to say that they fucked someone to win an award.

Ebiye can fuck off with his shitty apology.

Aramide may not be popular in mainstream media, but she is definitely a hard working & super talented Artiste. Ebiye's comments are wrong and doesn't represent popular opinion.

If he has apologised, we might as well accept it and move on.

Ebiye should get out with his half assed apology. This isn't the first time he's making such a distasteful comment about women. Like it isn't hard enough for women in the Nigerian music industry to succeed. Trash

BBNaija: Tempers flare as Bisola, Debie-Rise face off during games

Jeremih, US singer, discharged from hospital after severe battle with COVID-19