Dayo Amusa, the Nigerian actress, has traded words with an Instagram user who tackled her over her opinion on the terror attack on a Catholic Church in Owo, Ondo state.

It was reported that the attackers detonated explosives before firing at the worshippers, claiming the lives of many including women and children.

Celebrities and public figures have been airing their opinions on the incident.

Some have blamed the attack on the government, arguing that it failed to protect the lives of its citizens.

Others, in turn, have simply condemned the loss of life.

Amusa, while bemoaning the church attack, got into a heated argument with one of her Instagram followers.

Sharing a gory video, she had asked Nigerians to ensure they all get their PVCs to vote for better leaders in 2023.

“My heart bleeds, We are living a life of betrayal from the people who are supposed to protect us,” she wrote.

“Nobody cares how we are struggling to survive all these happenings and death roll.

“Our forefathers/leaders have failed us. This Nation has fallen! Get your PVC. That’s your only weapon!” 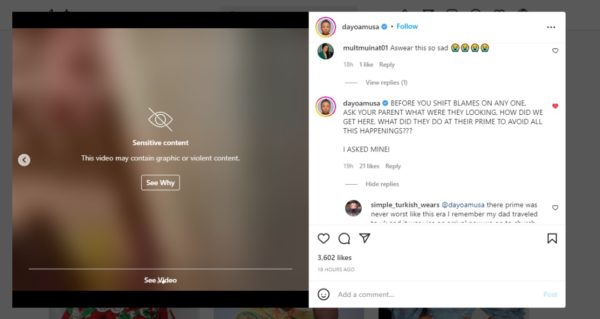 In the comment box, she added: “Before you shift blames on anyone, ask your parent what were they looking at. How did we get here? What did they do in their prime to avoid all these happenings? I asked mine!”

Responding, some fans attacked her and her cohort for declaring support for “the wrong leaders”.

“You people know the truth but your selfish attitude won’t let you all do the needful that is why most of your lives are usually miserable in the end,” the critic wrote.

“Campaign for whoever you wish to campaign for but if you campaign for the right person, it will be well with you. But if you do otherwise, your generation unborn will suffer in it. Period!”

In her response, Amusa wrote: “The same applies to you! Since you know the rightful people to vote. Please point them out, because if you don’t, may your entire household suffer beyond death!

“You should be ashamed of yourself instead. Are we the cause of the nation’s problems? Bring out a qualified candidate from your household. We will support him or her. But if you can’t produce 1, please save your breath.

“Stop transferring your frustration on those who like I don’t get it. Are we not living in the same country? If any of these politicians were your father, would you have said the same thing? Please, let’s be guided.”

Given the rather fragile state of the nation, there have been mixed feelings among the youth about re-electing as president older politicians who have served in public office in the past.

Earlier, Eniola Badmus, the Nollywood actress, and Brymo, the singer, had come under heated criticism for endorsing Bola Tinubu who is aged 70.