David ‘Davido’ Adeleke, Nigerian Afropop singer, has said he would manage himself in 2017.

The singer who is managed by Kamal Ajiboye of Twenty20 Media disclosed this on Tuesday via his Snapchat account. 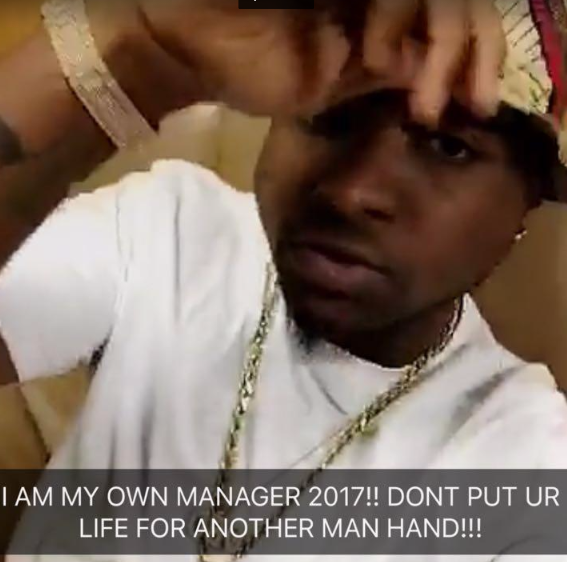 Davido, who signed a record deal with Sony Music in 2016, noted that he’s “back to the basics” while subtly deriding his international foray.

The Aiye singer was largely (in)active on the international scene in 2016 following his record deal with Sony Music.

Some of his post-Sony deal releases such as Gbagbe Oshi, How Long, Coolest kid in Africa failed to gain traction in the Nigerian market.

His EP, Son of Mercy, unlike his previous releases, didn’t make a huge splash as expected.

Subsequently, many of his fans had expressed dissatisfaction with his new sound and un-African vibe.

Also through his Snapchat, Davido said a new single Pere featuring Americans, Young Thug and Rae Sremmurd, will be released in February.

Davido was formerly managed by Asa Asika until the pair parted ways in December 2012.

Davido has also just released a collaboration with Mayorkun, an artiste signed to his Davido Music Worldwide imprint.

The single, Prayer, is off the yet to be released DMW album.

TheCable Lifestyle has reached out to both Davido and Ajiboye to ascertain the true state of things.

Asa proved that any genre can be commercialised, says Shaydee

Alexx Ekubo: Entertainment is the only industry doing well in Nigeria