Kanye West, an American rapper-turned-politician, has left many of his fans confused after he shared the tracklist of ‘Donda’, his much-anticipated album, in a tweet that has since been deleted.

The 43-year-old singer and entrepreneur took to his Twitter page on Saturday night to reveal the tracklist and release date of his 10th studio album — only to delete the tweet afterward.

West wrote that the album will be released on July 24, in a tweet that showed a hand-written list of 20 songs, including ‘Wash Us In The Blood,’ the Travis Scott-featured single. 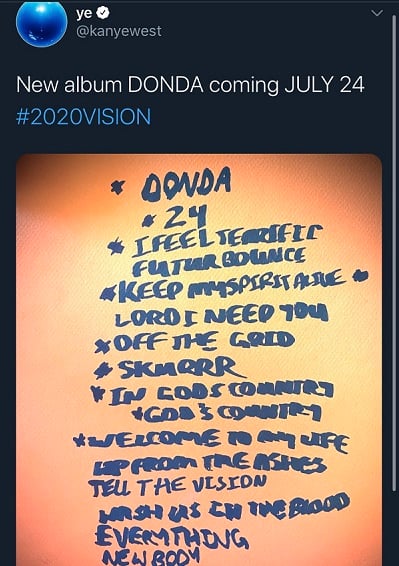 See the tracklist for ‘Donda’ below:

The development appears to have angered fans who took to the microblogging platform to vent their annoyance.

Kanye just tweeted and deleted the album announcement. I— pic.twitter.com/1pDdld8Iw3

LMFAOOOO KANYE DELETED THE TWEET. GOD DAMN IT I HATE IT HERE pic.twitter.com/Ypt1OsPlSO

On July 5, the award-winning rapper had expressed his interest to contest for the US presidential election billed for November 3.

West however secured just two percent of votes when included in one of the first national polls to be taken since he announced his presidential bid amid reports he would be dropping out of the race for the oval office.

Chynna Rogers, US rapper, dies of drug overdose at 25