A young man identified as Tagbo Umeike allegedly died in the company of music star Davido in the wee hours of Tuesday, says actress Caroline Danjuma.

Umeike, an associate of Danjuma, was reportedly partying with Davido and his crew in commemoration of his (Tagbo’s) birthday before the said incident took place.

Danjuma, in a now-deleted Instagram post, accused the artiste of dumping the body of Tagbo at an unnamed General Hospital in Lagos, after he allegedly died in his car.

Calling for answers, Danjuma said the artiste and his entourage returned to the club to continue their merriment after the said incident.

The actress wrote in part: “Davido where is Tagbo, he was with you and ur crew last night. You all wore face cap to hide your identities after he died in ur car. u dumped him at general hospital and ran away. The law must play its role this time.

“After you all abandoned him at general hospital you continued grooving at DNA and had the nerves to promote ur show. This ain’t no ordinary boy you can intimidate his family. We need you to tell us how he died in ur car and why u ran away. The police and the hospital confirmed u all ran away.” 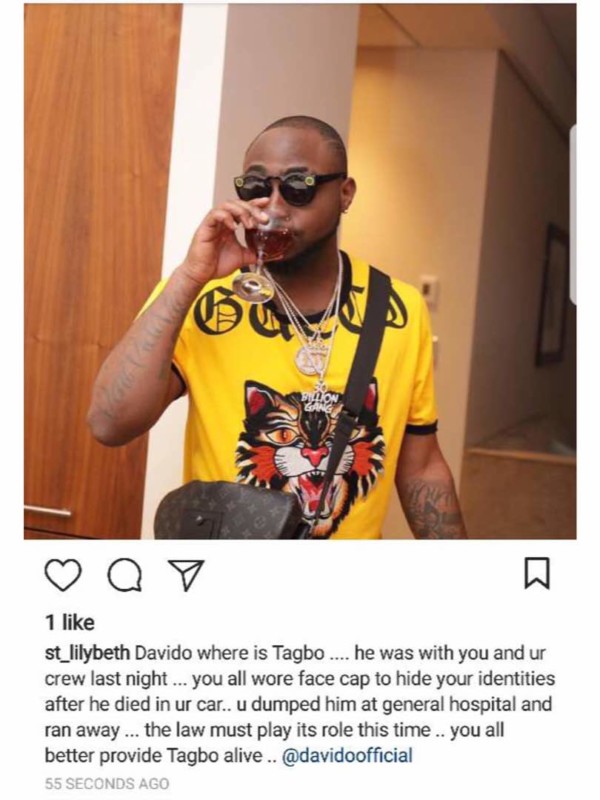 After deleting the post, Danjuma resorted to cryptic messages, and tributes in honour of Tagbo in subsequent posts.

She said Tagbo, an alumnus of Lagos State University, would have celebrated his birthday today.

Even in death lies are being said of you .. those who knew you knew you never drink to an extent of getting drunk … the wicked shall never go unpunished .. RIP 😢😢😢😢😢.. the truth is already out . Today is your birthday .. happy super birthday 😢😢😢😢

She wrote: “Even in death lies are being said of you. Those who knew you knew you never drink to an extent of getting drunk. The wicked shall never go unpunished.”

Danjuma later shared another photo of Tagbo walking on a beach with Davido. She has also deleted the photo. 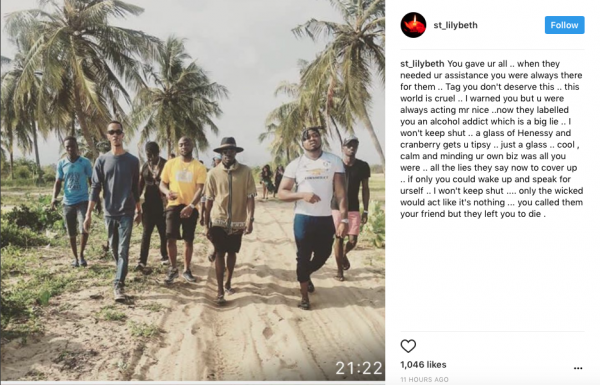 🙏🙏🙏🙏 if only all this ill names could bring u back , I am ready to be called all sorts … they only label you because they never knew you .. I could take a bullet for u because you were selfless .. never looked down on no one. Playful and you knew your limits .. you were never boastful nor excessive .. you never drank past 5 shots of tequila even if u tried .. all u lived for , all you hoped for and couldnt wait to achieve on ur birthday is over.. you always had something nice to say to me .. constantly encouraging me and looking out for me 😢😢😢😢😢😢😢😢😢😢😢😢😢😢😢😢😢😢😢😢😢😢😢😢😢😢😢😢

In a related video posted on Instagram, the engineering graduate can be seen surrounded by his friends at a club, with shots of liquor on their table, while voices can be heard warning him to watch his alcohol consumption.

Davido appeared in the video posted by Instagram user Elejo.

@instablog9ja #carolineDanjuma this is the video of us yesterday at the venue ….we were all celebrating 2 people’s birthday which is #TAGBO and one other guy ,we all had fun and everybody including @davidoofficial and crew said they were going to Oniru beach which the guy went with his car aswell,and that was the last time we saw him ,and later we heard that he died ….#RIP #TAGBO

According to Elejo, “we were all celebrating 2 people’s birthday which is #TAGBO and one other guy, we all had fun and everybody including @davidoofficial and crew said they were going to Oniru beach which the guy went with his car as well, and that was the last time we saw him and later we heard that he died”.

TheCable Lifestyle put calls through to Asa Asika, manager of Davido, to confirm the extent of his involvement in the alleged death of Tagbo but he failed to respond.

Danjuma, who refuted claims that Tagbo overdosed on alcohol, told TheCable Lifestyle, in between sobs, that she was not in the right frame of mind to answer any questions when phone calls were placed to her.

Davido on Wednesday took to Snapchat to described the allegations as “false information and complete lies”.