Beverly Osu, a former Big Brother Africa contestant, is facing backlash for using a nun-themed outfit for a photoshoot.

The reality TV star is the cover star of the new issue of Taylor Live, an entertainment and lifestyle magazine.

In the issue themed ‘Confessions’, Osu said she “decided to be open and let a lot of bottled up secrets out”.

The pictures from the photoshoot have generated mixed reactions, but mostly condemnation, on social media.

Osu appears semi-clad in one of the pictures. In another one, she is blowing out smoke from a cigarette and clutching on to a rosary.

In the third controversial picture, the video vixen is wearing a see-through lace gown. 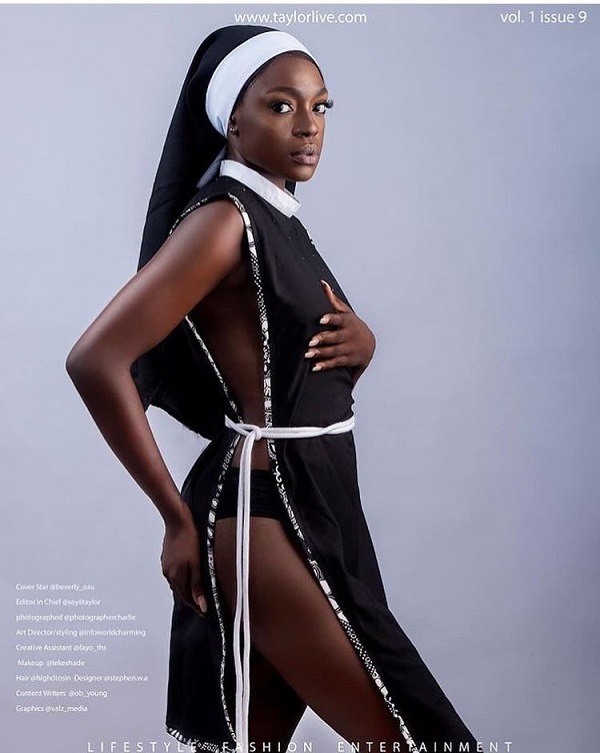 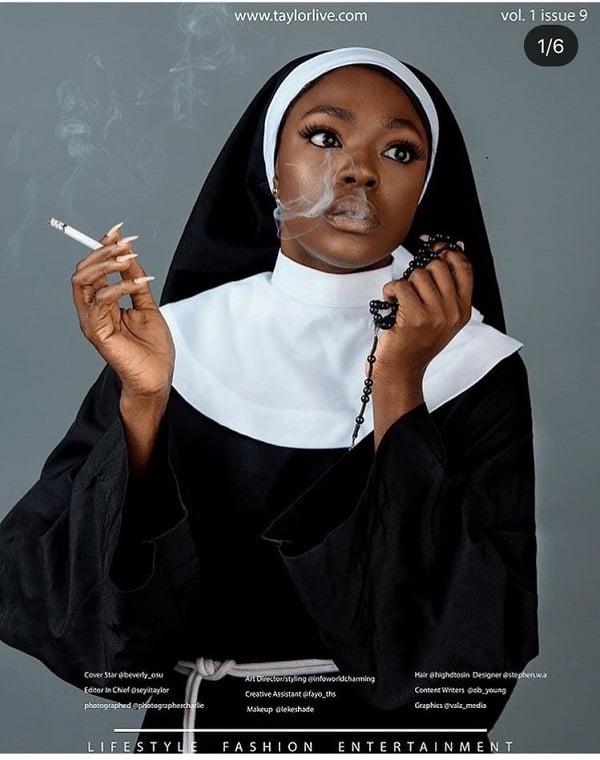 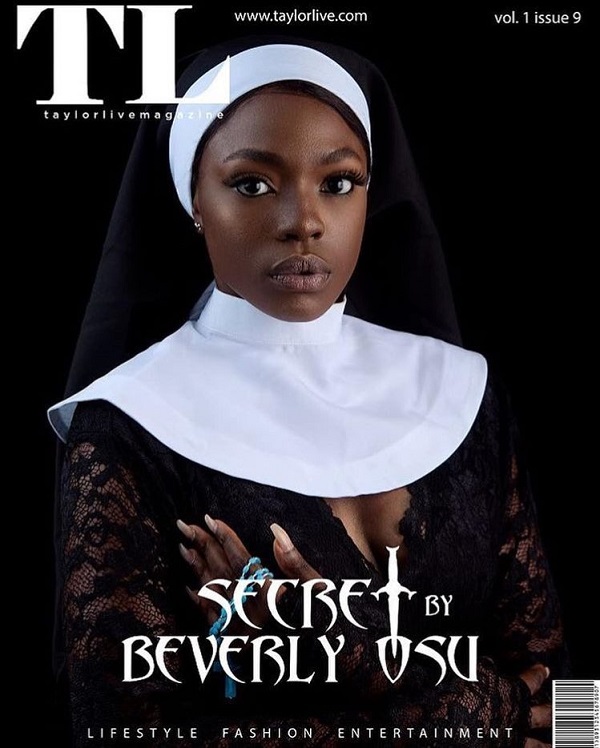 Beverly Osu's insensitive "Cigarette Smoking Catholic Nun" photoshoot is actually a cry for help. Let's be careful not to push her over the cliff. Any catholic priest will tell you this for free. You don't fight for God! #BBAfrica #BBNaija pic.twitter.com/rzPCfOLjjZ

Which Message is Beverly Osu trying to pass with this? pic.twitter.com/caC7TK0Otw

My opinion about this Beverly Osu issue is not even about her, cos I don't care. If the people of her faith are so tolerant that they got no problem with it then who am I to condemn her???
But my problem is with those sayin shit like she should have tried it with a hijab

I am Catholic and i dare say that this is the Height of STUPIDITY coming from Beverly Osu.

It's a slight on what the Nuns Habit and essentially Catholicism stand for.

Why such Blatant disrespect for something that religious.

I mean why so STUPID? pic.twitter.com/t9WlKaiKB6

Although people have abused sacred materials a lot including Rosaries.
But what Beverly Osu did in this shoot is outrageously disgusting.
Smoking in a seductive nun attire wit Rosary at hand?
Rosary is meant 4 prayers, Christian wont come after u tho but leave u to ur conscience pic.twitter.com/wifHf1bxPh

I am no Catholic, but the least you can do to belief and faith that people hold dear is to respect it.
What Beverly Osu did isn't wokeness. It is provocative, disgusting and it was simply done to make her trend. Sadly, we have fallen for the bait.

Can we talk about this nonsense? pic.twitter.com/9gjpuQ1OEt

Waiting to see Beverly Osu’s hijab pictures with cigarettes and alcohol on one hand and Tesbih or Misbaha in the other hand. I mean, she needs to balance the equation so she can get the result she’s looking for.

Falz sang *this is Nigeria* and when the Muslim community came for him, I vividly remember Christians saying "what was the big deal with ladies in hijab dancing shaku shaku", "it all about the message", "Christians don't judge". Now Beverly Osu does a photo shoot and now…

We know Beverly Osu can't try this with Hijab, but to be artistic enough, sometimes you need to go the extra mile to pass a message. I do not condemn her, rather I'm more concerned about the message she's trying to pass with this shoot. pic.twitter.com/QmYAJLINAh

Beverly Osu is the definition of what is wrong with society.. Her portrait does not define "woke" it only portrays her Hoeism..

And using the rosary in that concept is frankly disturbing.. A really stupid human being..