Niyi Lawal, ex-housemate of the Big Brother Nigeria (BBNaija) reality TV show, has splashed the sum of N3.4 million on drinks with friends at a Lagos nightclub.

Niyi was sent packing from the show alongside Yerins and Beatrice during the first eviction after they garnered the lowest votes for the week.

Since his eviction from the show, Niyi has started to pull the weight of fame.

The reality TV star and his friends turned up at a nightclub in Lekki axis of Lagos over the weekend where he shared beautiful moments alongside his fans.

At the end of the party, Niyi, who is married to Bella Bar, a South African woman, paid the said amount as money for the drinks purchased during the outing. 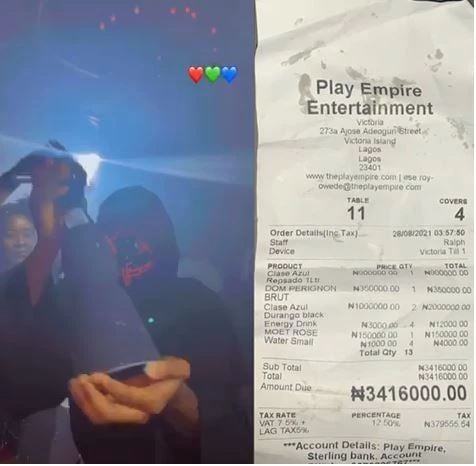 A source who also attended the outing with the reality star confirmed the development while speaking with TheCable Lifestyle on Monday.

The entrepreneur had earlier dismissed claims that his marital status led to his early eviction from the ‘Shine Ya Eye’ house.

“The marriage part did not play a lot in my situation, I was being me, and if I was single, I would still be like that,” he had said.

“I think it is a stereotype that plays in people’s heads. At the end of the day, it is about me and my reality.”

‘I was invited, not arrested’ — Timaya speaks on hit and run incident