Ayra Starr fires back at troll who called her ‘prostitute’

Oyinkansola Aderibigbe, the Nigerian songstress better known as Ayra Starr, has fired back at a troll who called her a “prostitute”.

The drama started after Ayra shared a new photo of herself with the caption “new song”.

The post which has been liked nearly 48,000 times — as of the time of this report — appeared to have infuriated the Twitter user (@IlelaboyeG) who resorted to abuse.

“Best in being ashawo,” the user wrote, to which the singer replied, “Just like your mom, twins”. 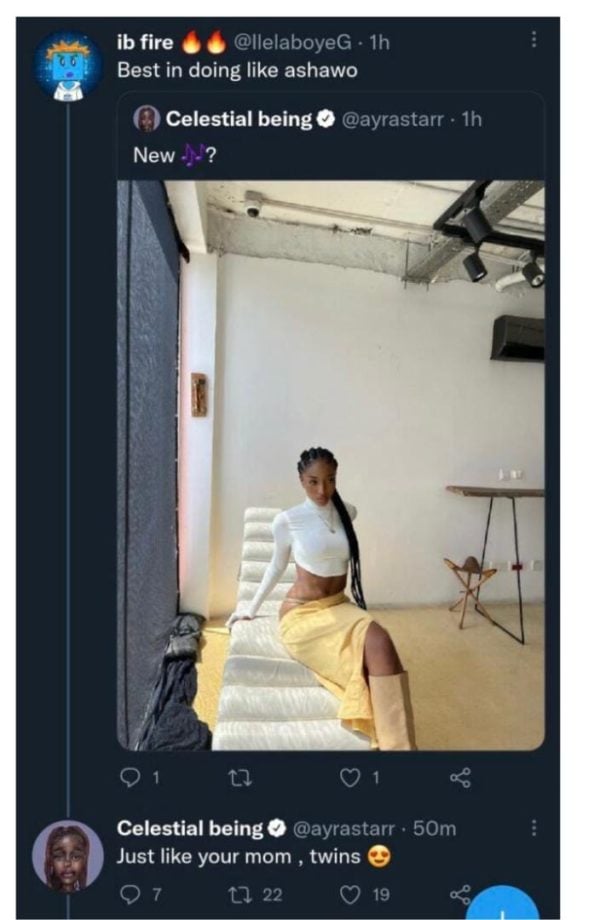 The fast-rising singer and songwriter started to gain attention and followership after she posted song covers on her social media platforms.

The 20-year-old songwriter signed to Mavin Records in 2020 and released her debut self-titled EP in January 2021.

She also released ’19 and Dangerous’, her first studio album, in August last year. The body of work houses an endearing but arrogant single titled ‘Bloody Samaritan’.

Starr was nominated in the ‘Best African Act’ category for the 2021 Mobo Awards alongside Wizkid, Davido, Burna Boy.

Rita Edochie: I want Trump to win US election for the sake of Christians