Timi Dakolo, the Nigerian singer, has hit back at those criticising him for performing at the presidential declaration of Atiku Abubakar, former vice-president.

The musician rendered a colourful performance of ‘Great Nation’, his hit song, as Atiku officially declared his intention to contest in the 2023 presidential election at the international conference centre (ICC) in Abuja on Wednesday.

Dakolo has been under fire on social media since Atiku posted a video of his performance on his Twitter page.

The majority of users tackled the musician for attending the event despite his staunch criticism of the political elite of the country.

They were, however, others who argued that he did nothing wrong.

Amid the wave of criticism, an Instagram user posted a screenshot of the video with a caption saying Dakolo is “endorsing PDP’s Atiku.”

“Let it be known that Timi Dakolo endorsed Atiku.” 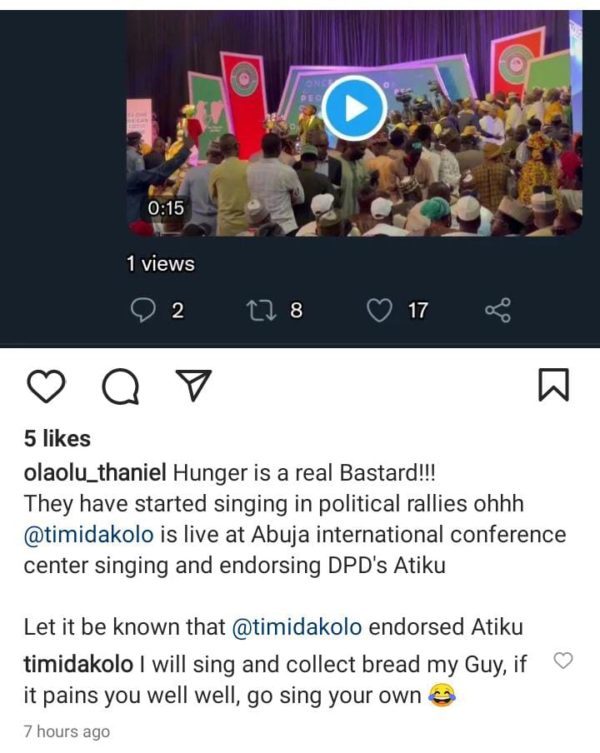 In his reaction, the ‘Iyawo mi’ crooner jumped on the comment section of the post to justify his action.

“I will sing and collect bread, my guy. If it pains you well well, go sing your own,” Dakolo wrote.

The singer’s criticism comes a few days after some former Super Eagles players were lambasted for honouring the invitation to play a charity match to celebrate the 70th birthday of Bola Tinubu, the presidential aspirant with All Progressives Congress (APC).

Wizkid: My doctors advised me to cancel all shows… I toured for 2 years without a break