Angela Kinsey, an American actress, has tested positive for the novel coronavirus.

The 49-year-old actress took to her Instagram story on Wednesday to break the news to her numerous followers.

Kinsey shared a photo of the test result while revealing that she had to get re-tested after she started feeling ill.

She added that even though she had tried to quarantine herself from members of her family who were already suffering from the virus, she knew she was likely going to be infected.

“I started not feeling well and went to get retested. I knew the odds were against me since I was living with four COVID-positive people. I really tried to quarantine and not get it,” she wrote. 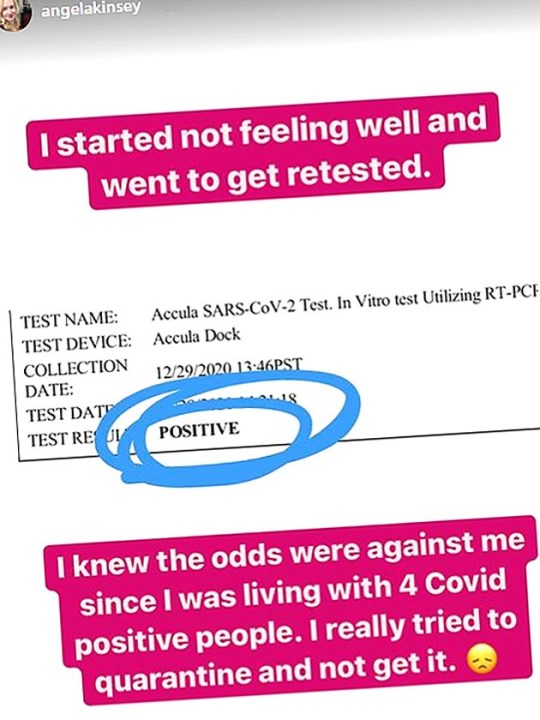 The film star had earlier revealed that Joshua Snyder, her husband, two of their three children, and her mother all tested positive for COVID-19.

The actress, who has been updating her followers on their health status, had revealed in a post on Tuesday that she was going to get re-tested because she was “feeling a little off” as a result of the exposure.

“I’m still congested, which you know because I’m in a house with people who have Covid, which is freaking me out, I am going to get retested today. I’m going to do a rapid test because I’m just feeling a little off. Maybe I’m just run down,” she said.

The movie star also said that her family members were getting better and responding to treatment.

“Josh is feeling better, but he’s just really fatigued. But he doesn’t have the nausea, and the headache and the tightness. He just feels tired. He’ll have breakfast, and then he kind of needs to just sit for a minute,” she added.

“My husband is super athletic and he works out a lot. I think just not being able to do anything major is making him crazy. He’s feeling the limitations of being sick.

“Kids are great kids, totally fine, bouncing off the walls. My mom is doing better but they want to keep her in hospital a few more days just to really make sure. She’s so ready to go home, and that’s hard, you know.”

Kinsey is known for her role as Angela Martin in ‘The Office’, a situation comedy aired from 2005 to 2013. She got married to Snyder, an actor, in 2016, after she ended her first marriage.

Davido: I’ll ensure N250m donated to orphans is not diverted

AY says Kemen was under pressure to commit suicide, apologises for controversial joke