Ali Baba: Jonathan was betrayed by many of his foot soldiers

The comedian on Saturday took to Instagram to state that the former president was repeatedly given bad counsel which resulted in faulty decisions.

The social media post read: “I’m further convinced that the people who President Jonathan entrusted with authority in different sectors of the economy and government did him in. And they did this smoothly & strategically.

“The crop of people I’m talking about were those ones who were more concerned with their goals to enrich themselves, so they were going about doing everything they could to amass wealth. Then there was this other group who were building their political dreams will turning GEJ’s administration to a nightmare.

“They tactically made sure they alienated all those who had superior reason and better advice, away from him. They strategically put him on a war path with those who he should have had as his backbone in the unpredictable storms of Nigerian politics. They knew that if he listened to those people they (the vultures) would starve.” 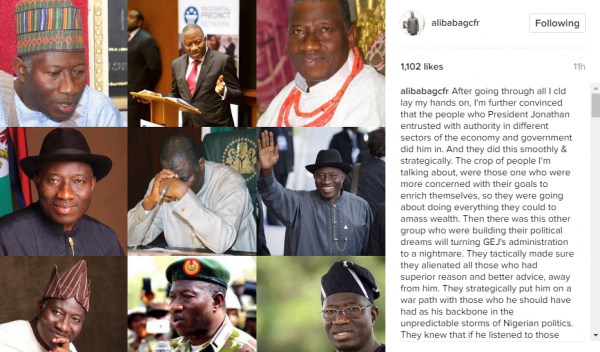 To buttress his point that Jonathan was more than often, led down the wrong path, Ali Baba gave “two examples” of instances where he believes Jonathan was misled.

He wrote: “After an event, ADC sent word to see GEJ. While waiting, at about 1:30am or later, 8 or more senators came to inform him of the plans by members of National Assembly to cross carpet with their Governors. Some leaders of PDP were there. They told GEJ to forget them. Good riddance! one of them said. The devil is in the detail.

“If governors who fund the party machinery cross carpet, it exposes your party. When they take their reps and senators, it endangers your President. So, 3 weeks after that meeting, there were(sic) mass defections. That was when PDP rushed to court to stop them. Another instance, this time it was a phone call, when I was in Abeokuta.”

“Baba had just come back from a UN envoy trip. He told GEJ, to think very well & beyond the 16/19 elections of Gov’s Forum. That if 19 govs voted Amaechi, then you have enemies in your camp. Baba said accept the result, deal with it later because the world was watching. For wia? The advisers, said call his bluff. Now, it is clear, they were all fighting for themselves. Not GEJ.”

“They all enriched themselves to the detriment of his administration. Bet he is shocked at some revelations. I have known him since Deputy GOV days and I can say, he was betrayed by many of his foot soldiers.”

R.I.P Buhari, Ayade the retired hawker and 4 other highlights of last week

‘Surprise us, do the right thing’ — Banky W calls out Buhari over Sowore’s rearrest