Chimamanda Ngozi Adichie, the award-winning author, read from her essay ‘Notes On Grief’ at the Alliance Française auditorium in Ikoyi, Lagos.

The book event, which was held on Saturday evening, played host to members of the diplomatic corps, literary aficionados, dilettantes, notable personalities from within the business community, and journalists alike.

Among the attendees were Eghosa Imasuen of the Narrative Landscape Press, her Nigerian publisher; Emmanuelle Blatmann, French ambassador to Nigeria; and Titi Adenuga, wife to the billionaire entrepreneur Mike Adenuga.

In June 2020, Chimamanda lost James Adichie, her father who died of a kidney condition he was hospitalized for.

Ifeoma, her mum, would also pass away eight months later, leaving the family in yet another round of mourning.

Adichie’s book event, which started with her reading, quickly morphed into what the audience would later describe as a “group therapy session” where many opened up to the author about their own experience with grief and loss.

On the sidelines of the event, Chimamanda touched on how the sense of community at the reading left her gleeful.

“I wasn’t sure what to expect doing this. And it’s a strange thing to say that an event about grief and sadness has made one happy. But, in a strange way, it has. I felt a sense of community,” the Nigerian author explained.

“I also just felt really heartened that people were talking about their own grief. Ours is a country where we’re often told to move on. So you’re grieving and someone tells you, ‘oh, sorry, it has happened. Just move on.’

“But you’re still in pain. I thought it was just nice to have a space where people were talking about it. I was even more moved by the guy who talked about his father still being alive and how he’s expecting to feel regretful.

“It’s interesting because you realise that you have to make use of the time you have left with your parents. If you love people, love them fiercely because we don’t know what’s going to happen tomorrow.

“I’m grateful because I think it takes, not just showing vulnerability, but strength to talk about these things.”

Chimamanda condemned what she described as the Nigerian propensity to rush the bereaved into “moving on”.

“There’s so much I still don’t know about grief but I think it is something I will continue to talk about, especially in the Nigerian context; how important it is for us to be allowed to sit with our grief and not be rushed,” she added.

“There’s a young woman whose mum died. She said she didn’t want to hear anything about God. People criticised her and I said, ‘no, allow people  grief how they choose to.’ We need to be allowed to deal with grief’s complexity.” 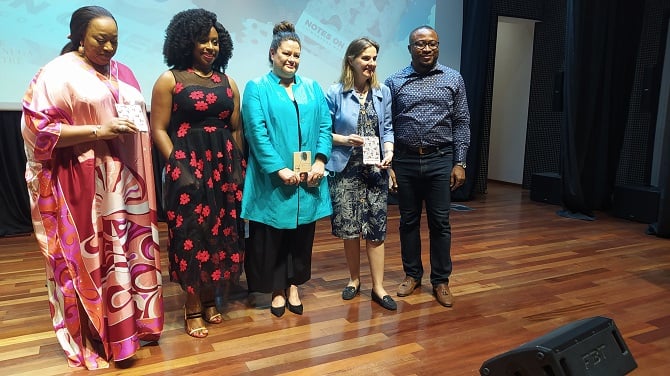 Adichie further expressed her lack of enthusiasm in the practice of clinging to religion as a coping mechanism.

“I’m just so over that. There’s the way that we hide pain behind religion. People suffer in silence because they’re, expected to be strong. We should talk more about the reality of grief. We’re told, ‘be strong’,” the 44-year-old said.

“I’m like, ‘my life just fell apart, why the hell should I be strong?’ If we’re expected to remain normal in grief, then when are we allowed to fall apart? I often say, ‘when I die, you better don’t be strong. You better bloody cry!'”

“Grief is an education. Before my father died, I had mourned, people. Those I loved had died, my grandmother, my friend. But it took my father dying for me to suddenly start questioning everything.

“I started thinking about the things I’d said to people [who lost their loved ones], words of condolence that I really regret now. After the funeral is when the real grieving begins. But Nigerians can be very dismissive of grief.

“There’s also that human thing where we’re uncomfortable with grief; where we don’t know what to do.  The Nigerian approach to grief? We just need to stop it.”

The event ended with photography and networking sessions while the author gave autographs to waiting readers.

In the book, she made visceral the experience of death and grieving, documenting her memories of the deceased.