How UI sacked senior lecturer over ‘refusal to vacate office’

The management of the University of Ibadan has terminated the appointment of Adenike Ogunshe, a senior lecturer.

Ogunshe, who has taught in the university for 15 years, was sacked for refusing to vacate her office which was termed a preparatory room.

The doctor of microbiology told TheCable Lifestyle that she had been receiving death threats since 2006 over her refusal to exit the office.

She said: “I was asked to move out of my office to another office. The first time, they said that the reason they wanted me to move out was that they wanted a resident technologist to stay in my office and I told them that I had a security issue which would make it difficult for me to move out because the case is with the Nigeria Police.

“The university of Ibadan security took me to Sango police station with their van in 2006 when I started getting death threats, at a point I received a blood written letter and the DPO asked for the location of my office and house. I told them everything and he told them then that if anything happened to me, there would be a case against UI.

“A security detail was attached to me by the police and I got another message that the life of the security man was not safe. A friend relocated me to Polytechnic of Ibadan but the threats didn’t stop.

“Then they said they wanted to move me because the place belonged to another department, then I asked that what about other lecturers who are on the same block with me, why am I the only one to be moved. Later, they said my office is a preparatory room and I should move.”

When contacted by TheCable Lifestyle, Tunji Oladejo, UI director of public communications, said that her appointment was not terminated for refusal to vacate her office and demanded to see the documents that stated otherwise.

She explained that her problems started after she opposed the appointment of a head of department which she claimed was against the regulations of the university.

“I was employed in 2000 and had no major problems until 2006. According to regulations, a Professor should be the Head of Department, while in the absence of a Professor, a Reader (Associate Professor) / Senior Lecturer will be an Acting HOD, and a Lecturer I can only be a Coordinator.

“A Prof. A.I. Sanni wanted to be the HOD in 2006 but a Senior Lecturer who was brought to the Department and mentored by Prof. Sanni, Dr. A.A. Onilude, also wanted to be Ag. HOD. There were serious reactions all over the campus when the then VC, Prof. O.A. Bamiro appointed Dr. Onilude as Ag. HOD.

“The Academic Staff on the campus even demanded an emergency senate meeting due to the controversial appointment of Dr. Onilude. When Prof. Bamiro insisted on not reversing himself, Senate demanded that the case be forwarded to Senate. I was also one of those who reacted against the controversial appointment, and wrote to that effect. Since then (2006) till date I had gone through hell on the University of Ibadan campus.”

She further explained that a case was brought up against her during the tenure of Isaac Adewole, the immediate past vice chancellor of the university who is now serving as minister of health.

“Prof Adewole wrote to NUC that I had been tried for four allegations such as collecting bribe from students, refusal to move from a preparatory room. I got a letter from NUC and I wrote back saying that the allegations were false. I also told them that I was going to sue NUC for defamation.

“After that, Prof Adewole instructed that I should be issued a query for refusing to vacate a preparatory room and I demanded for earlier documents that showed that I had earlier refused to leave the preparatory room. In that same response, I stated my reasons for not wanting to leave the office.”

A HISTORY OF QUERIES

Subsequently, she petitioned the Nigerian University Commission (NUC) over the matter and after investigation, the body concluded that she should be given a strong reprimand.

The NUC’s resolution read in part: “Following the Commission’s enquiry from the University on the various issues raised in your appeal, the Vice Chancellor has written to explain the effort the University has taken to resolve the alleged grievances.

“The two standing Committees of the University, STC and SSDC that investigated your allegations found you culpable and recommended that you should be strongly reprimanded.” 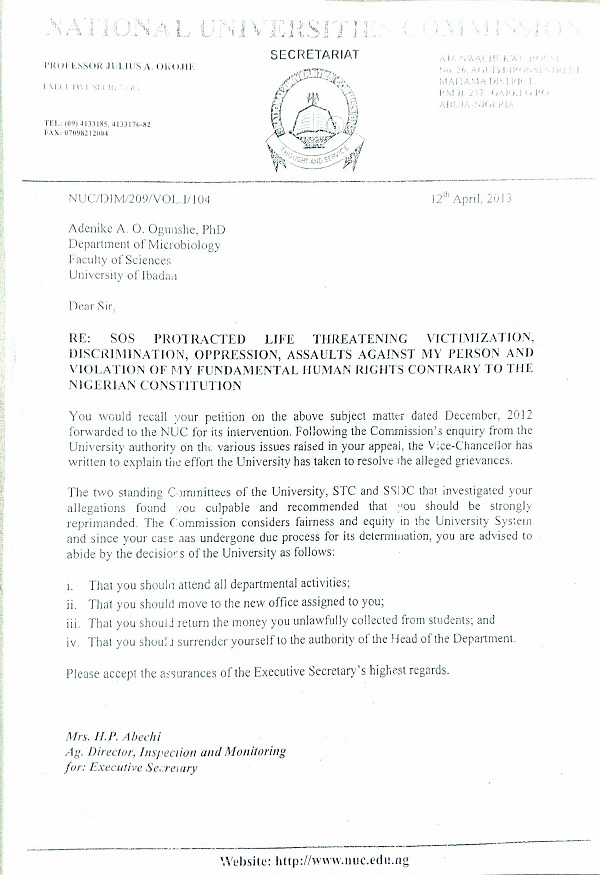 In January 2015, Ogunshe received an invitation to appear before the disciplinary committee for further consideration over the “allegation of refusal to vacate preparatory room in the final year laboratory of department of Botany”, a similar query to the one she received in 2013.

The lecturer appeared before the committee but never got a feedback for over a year.

Then in June 2016, she received a letter titled “COUNCIL DECISION- Allegation of refusal to vacate preparatory room in the final year laboratory levelled against Dr Adenike Ogunshe, senior lecturer, department of Microbiology”.

The letter, signed by Stella Soola, deputy registrar, approved the recommendation of the senior staff disciplinary committee to terminate her 15-year-appointment with the university. 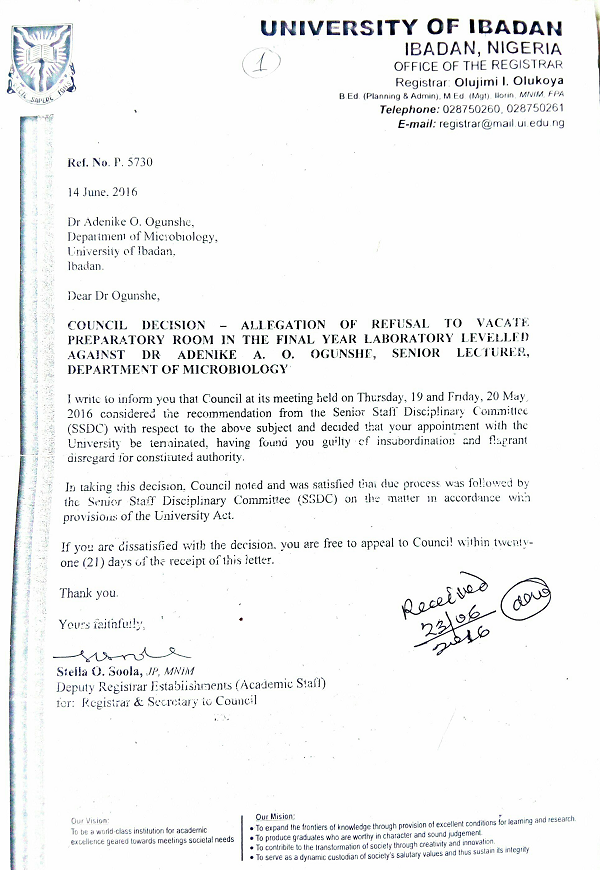 The senior lecturer who has been due for promotion to professor since 2013 however, said the decision of the council was not based on the allegation she was tried for.

“The decision of council was not based on being found guilty of allegation refusal to vacate preparatory room in final year laboratory, which is the allegation for which I was tried.

“According to the letter under reference, council considered the recommendation from the SSDC with respect to the subject, which is allegation of refusal to vacate preparatory room in final year laboratory. However, the decision of Council that my appointment with the University be terminated was based on being found guilty of allegation of insubordination and flagrant disregard for constituted authority.

“I was never tried at any time, by the SSDC or any other committee, for insubordination and flagrant disregard for constituted authority, upon which the Council decision was based.

“There must have therefore, been deliberate attempt not to give me notice of those reasons, as contained in the alleging document(s), even when I requested for it (them) on 07/05/2013.

In spite of her termination, Ogunshe’s personal profile page on the institution’s website still exists.