The Legend Series: I will stop acting when I can no longer eat eba, says ‘Oga Bello’

Since he took on the role of ‘Oga Bello’ in ‘Comedy Half  Hour’, the appellation has stuck to Adebayo Salami like a barnacle. The name, many have argued, is perhaps more prominent than the birth name of the veteran thespian.

After over half a century of sustained relevance in the fickle world of make-believe, Salami would be roundly celebrated if he chooses to hang up his boots, but the actor insists that will only happen when he can no longer swallow a morsel of Nigerian staple, eba.

Salami’s success in the film industry has served as the catalyst and indirect launchpad for the careers of many of his subordinates and peers.

That his children, Femi, Kemi and Tope Adebayo, are following in his footstep, is a source of fulfilment to the actor who says he made his name “before the existence of films”.

On this episode of TheCable Lifestyle’s The Legend Series, ‘Oga Bello’ talks about his early days as an actor, running away from home to pursue his acting dream, passing the mantle to his children and what lies ahead in the horizon for him.

How did it feel growing up in a period when there was no technological explosion?

The most important thing is to adapt to whatever situation you find yourself. Then, I was in the travelling theatre where we would take our shows around the country and if you want to send an emergency message home, you had to use the telegram and you would make it express which would take about three or four days.

How did you find acting?

When I was young, I was interested in anything related to the arts. Where I was raised in Lagos Island, during Ramadan, we would go out in the middle of the night to wake people to eat. During the Ileya festival, we would do agere. When it’s Easter, we practise a Brazillian culture where we wear things that made us look like different animals and we had another that we did in December. Cheif Hubert Ogunde inspired me and I picked up acting. 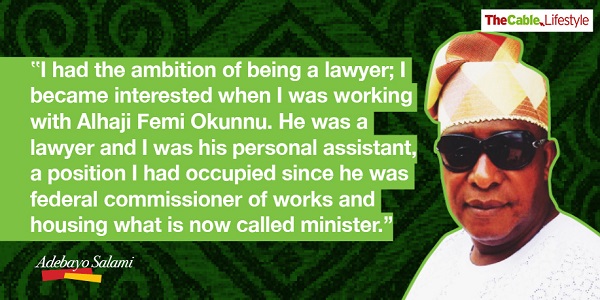 Did you have any other ambition?

I had the ambition of being a lawyer; I became interested when I was working with Alhaji Femi Okunnu. He was a lawyer and I was his personal assistant, a position I had occupied since he was federal commissioner of works and housing what is now called minister. When he finished his tenure, he asked me to resign and I did, it was then I became interested in law.

How did your parents take your decision to venture into acting?

In those days, no parent would allow their child become an actor because they didn’t see any prospects in it. The common dream of parents was for their children to become doctors, lawyers or engineers so naturally, my parents refused. Let me say God directed me to remain adamant about acting. In fact, I ran away from the house and I was living with a friend in the church so I could continue acting. My parents found me after seven months.

Take us down memory lane on your early days in acting. What was it like?

When I started, it was not about the money it was the passion and that was how it was for almost everyone who joined at that time. The joy of doing what I loved was enough for me.

How do you feel when you are in the same movie set with your children?

I’m not in control of them at that time, the director is in control and he is the one that is interpreting the script so my children and I will listen to the director. When my son, Tope, is the director, he will correct me in cases of errors and I will adjust where necessary.

Did you encourage your children to join your trade?

How do you feel about the success of your children in the industry?

I thank God for what he has done for me. Femi is someone who is always ready to serve his people, just like me. I’m very happy because a lot of people ask that God do such for them and he has done it for me.

Would you change anything in your journey so far in the industry?

Which do you prefer; the industry back then or now?

Both times are good. Back then we got allowances to eat but we can’t get such now. When I was young, I got one and half kobo as food allowance. I’d buy beans worth one kobo and garri half kobo and I would be filled. You can’t give children such now so we have to move with the trends. Actually, there has been development but the economy is bad. Sometimes if you earn money and try to compare the value, you will think that the old money has more value.

Which acting memory is unforgettable?

I can’t forget my first stage play, it was the first time I faced a crowd. An army officer, Benjamin Adekunle, was in the crowd and he was famed to be strict. I was assigned the role of a talisman. At first, I was scared but I had to overcome my fears.

How do you handle fame?

You have to be very humble and appreciate the people that appreciate your work. When people call you on the street, it’s because they appreciate your work and although they do not know your state of mind at that time, they want you to be cheerful when they greet you. You have to learn how to manage that because if you don’t respond well, they will begin to say all sorts about you. 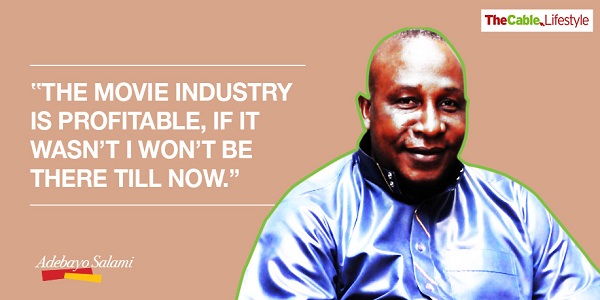 Is the industry profitable?

The industry is profitable, if it wasn’t I won’t be there till now. It depends on how you practise it.

Before cinema, it was stage performance which metamorphosed into television. There was never a time that I felt like quitting because the money wasn’t steady. Then in my group, Awada Keri Keri, we were placed on a salary scale so you got paid at the of the month. I remember that the last salary I took was N80 for the month.

I started acting in 1964 when I was in Standard six. I got married in 1975 and we were not travelling then so I had no issue with raising my family. I would go to the office in the morning, close by 3pm, go to rehearsal by 5pm and get home by 7pm. My family understood and we coped.

Have you left comedy?

No. That’s the mark of a good actor, he must fit into any role. I have not left comedy, if I get a comical script tomorrow, I am ready to interpret it well.

How did you deal with the various transitions in your career?

The transition was easy especially when you have passion and you give yourself the appropriate education. For example, I attended seminars on stage, film and television production. I read books and upgraded myself in various areas. I didn’t only attend seminars in Nigeria, I went as far as New York and London. The industry also requires practical experience so I read books to learn the rudiments of the profession and used it to garner practical experience.

How would you describe your time as ANTP president?

My tenure was fantastic, I was there to ensure that I made ANTP popular and inject discipline into it which I did. I enjoyed it because my executives were cooperative, That was when people recognised ANTP because we took it to the local government, state, national and international level.

Any chance of going into politics?

No way, forget about it. I’m not a politician and I can never be one, instead, I would support any government that I believe in, in terms of advocacy.

How long will you remain active and continue to entertain fans?

I still have the ability to do it and they are still demanding for me. An artiste doesn’t retire, he moves with time. I will retire on the day I can no longer eat Eba. I also move in time with my stories, I always write social satire and things will continue to happen.