“With deep pain in our heart but with total submission to the will of God, we bring to the notice the death of one of our very committed members in Delta state Sir David Osigie,” Yakubu said in a statement to TheCable Lifestyle.

“Until his death, he was an active member of the guild who was always ready to contribute in any little way he could to move the guild forward.

“His death is a big loss to AGN and Nollywood at large. We pray God accepts his soul and grants him eternal rest.”

The circumstances surrounding the actor’s passing are yet to be ascertained as of the time of this report.

But in her tribute to the deceased, Ngozi Ezehwho, the actress, said Osagie was not sick.

“I hate to say this but we have lost another Nollywood king, Sir David. He wasn’t sick, it just happened. How do we explain this, another loss in Nollywood. Oh Lord have mercy. I Mourn again oh,” she wrote on Instagram.

Ibiwari Etuk, another actress, took to the comment section of Ezehwo’s post to reveal that Osagie had finished filming before he passed on.

“This can’t be explained. He filmed yesterday o went back to rest hoping to resume shoot today but never woke up. Another king role interpreter is gone…. What is this o God,” she wrote. 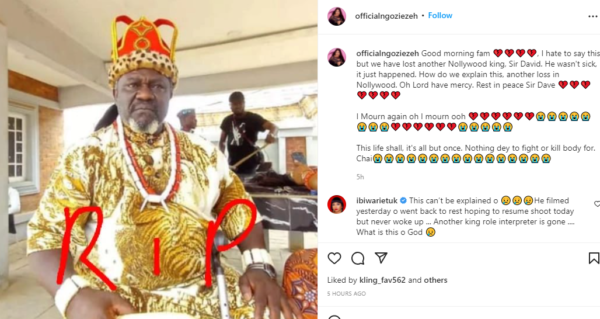 Osagie’s death is coming as the third that would hit Nollywood in the last five days.

Last Friday, Chinedu Bernard, the actress, was said to have slumped while cleaning a church in Enugu.

It is understood that the actress was rushed to a hospital where she was eventually confirmed dead.

This was followed by the case of Francisca Choji, another actress, who was found lifeless in a Plateau hotel.

Chimamanda details her ‘alienation’ from Catholicism, alleges harassment of females