2baba to Blackface: Apologise or I’ll sue you for defamation

After making series of song theft allegations against him, singer 2baba Idibia has asked his former collaborator Blackface to apologise or get sued.

In a letter sent through his lawyers, Seun Omotoba & Co, 2baba demands that Blackface apologises for all the defamatory remarks he has made about him.

According to the letter dated May 5, Blackface has a week to apologise or be ready to face legal actions. 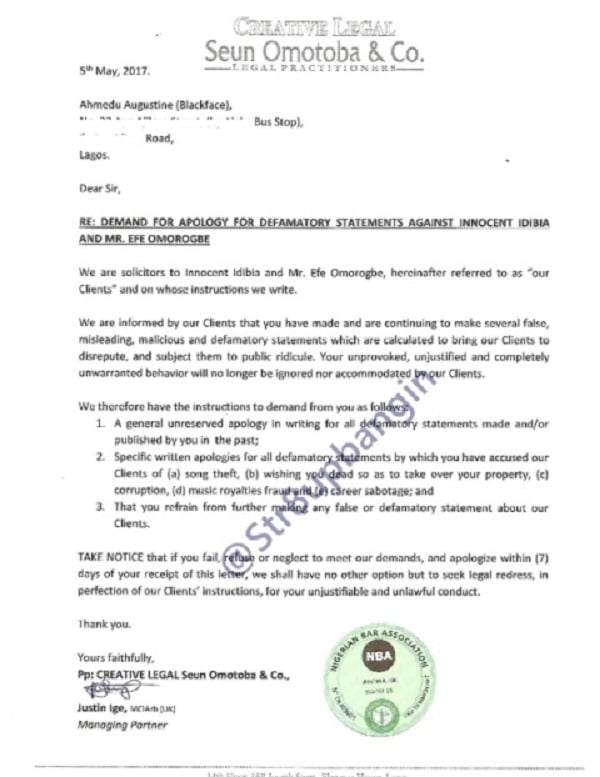 Blackface had recently told Premium Times that ‘Let Somebody Love You’, a 2baba song, was originally his.

He also claimed that he had not yet been compensated for writing African Queen.

“2face sang my song (Let Somebody Love You) and featured an American artiste, Bridget Kelly. His manager published it without my permission,” he had said.

Prior to that interview, Blackface had called out 2baba on Instagram, where he described him as a “lazy, jealous” artiste who “sabotaged” his career in the music industry.

“You’re a lazy artist despite all your gifts and when you found out I was making new artists famous and I was improving vocally you got jealous and planned the industry to sabotage me and you kept making music about it,” he had said.

“8 years of sabotage and am still here and am still inspiring you and for that even if you hate me you should still be thankful to me still.”

Based on the date the letter was issued, the notice given to Blackface lapses today.

Wizkid hints at fifth album — months after ‘Made in Lagos’

Fame will not give you wealth, D’banj tells Nigerian youth